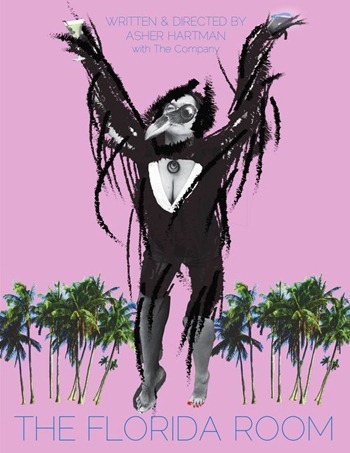 The playâ€™s non-linear, poetic narrative concerns a man who has become so alienated from himself at mid-life that he is split into beings, gradually becoming a deity whose creative and destructive impulses have a profound effect on his closest friends. Beneath the mythically charged plot is a terse exploration of psychological violence, debt, friendship, and the American quest for security. Audiences watch as the play unfolds around them. Musical, nastily funny, and haunting, The Florida Room makes us think about the deep emotional attachment we have to the material world.

Hartmanâ€™s public performance and workshop, Walking Into Walls, are part of a new collaboration between Cannonball and Machine Project, offering three Los Angeles-based artists research residencies at Cannonball and the resources to create new performance-based works in response to Miami. Participating artists include Corey Fogel, Asher Hartman, and Juliana Snapper. This collaborative project is generously supported, in part, by the John S. and James L. Knight Foundation.