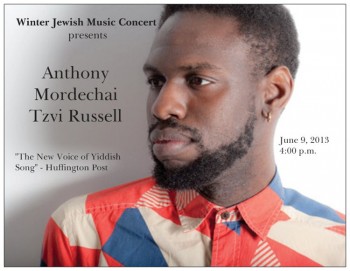 Anthony Mordechai Tzvi Russell, the â€œnew voice of Yiddish music,â€ will perform in concert on Sunday, June 9th, at 4:00 p.m. The event, the first solo concert ever presented by the nationally-renowned Winter Jewish Music Concert, will be at Temple Israel of Greater Miami.
Russell, an African-American who is a Jew-by-choice, is a classically-trained bass who over the last ten years has sung with opera companies in San Francisco and New York. After his years in the world of classical music, Russell was drawn to Yiddish music by its emotional power.
Russell has now focused on Yiddish music, and has performed concerts of Yiddish music in New York, Toronto, and Boston, as well as Northern California, where he resides with his partner, Rabbi Michael Rothbaum.
Mr. Russell will be accompanied by Alan Mason, the Music Director of the Winter Jewish Music Concert.Â
Temple Israel is located at 137 N.E. 19th Street, blocks away from the Arsht Center and Wynwood. Tickets for the concert are $18 and $36, and may be purchased at www.JewishConcert.org or by calling 1-800-838-3006.