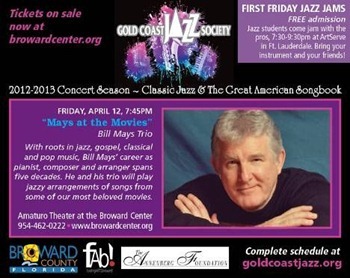 Single tickets are $40 per person. Tickets for students and teachers are only $10 with ID.
To purchase tickets, contact the Broward Centerâ€™s AutoNation Box Office at 954-462-0222 or online at www.browardcenter.org or www.goldcoastjazz.org.

This concert is based on Maysâ€™s recent CD, Mays at the Movies and includes musical selections from some of Americanâ€™s most popular movies including The Shadow of Your Smile, The Summer Knows, Charade and others.  Drummer Marty Morell and bassist Richard Drexler will fill out the trio for this concert.

A jazz pianist, composer and arranger, Mays has played with the best of the jazz world including stints as accompanist for Sara Vaughan, Frank Sinatra, Woody Herman and Gerry Mulligan. His bio includes an extensive list of television and movie scores on which he has played or contributed music. He has worked with legendary film composers including Michel LeGrand, Johnny Mandel and Henry Mancini.  To read more about this accomplished jazz musician, go to his website at www.billmays.net.

"Gospel music was the first music I heard,â€ says Bill. â€œDad played the trombone, guitar and harmonica (at the same time!), piano and organ, and I have vivid memories of him playing the accordion while my mom sang.   Earl â€œFathaâ€ Hines provided Bill’s first exposure to jazz when "a friend took me to a jazz brunch and Fatha was playing solo piano,â€ recalls Bill. â€œThat was the beginning of a love affair with jazz that continues to this day.â€

Maysâ€™s jazz career began with the Bill Green Trio in San Diego.  He moved on to Los Angeles where he worked jazz gigs with LAâ€™s best players.   Soon he became a fixture in the Hollywood recording studios as LAâ€™s  first-call pianist for singers where he worked with stars including Dionne Warwick, Anita O’Day, Al Jarreau and Frank Sinatra.

Mays moved to New York and began a fruitful affiliation with Palmetto Records in 1999. "That was a major move for me artistically,â€ says Mays.  â€œI found a connection with my trio of drummer Matt Wilson and bassist Martin Wind that was truly special.â€  Recordings under the Palmetto label include Summer Sketches and Going Home.   In 2009 he assumed the piano chair in the Phil Woods Quartet while continuing to tour with his own trio.  That year he also produced his CD Mays at the Movies with Peter Washington on bass and Billy Drummond on drums on the SteepleChase label.

Currently, Mays tours and records in many varied configurations including a duo with trumpeter Marvin Stamm, the Inventions Trio, The Bill May Trio (featuring Matt Wilson & Martin Wind), duo with Bud Shank, a sextet and as a solo pianist.