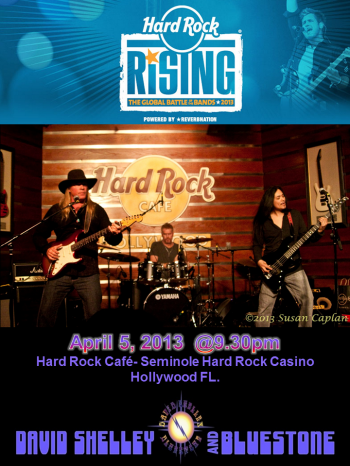 David Shelley And Bluestone compete in the final local battle on April 5th, 2013 after a great win on March 29!

Thank You To All The Fans For The Incredible Support! The band scored the highest of all other 3 winning bands from pervious weeks. April 5th will determine which band will represent Hollywod in this GLOBAL BATTLE!
1st round March 29th- Godsend, Shadow Reborn, David Shelley & Bluestone- David Shelley And Bluestone Win!

Audience participation is part of the judging process. You can help choose the band that will ultimately play London’s Hard Rock Calling as part of a World Tour, make an album and video with Hard Rock Records, and win new gear!
We look forward to seeing you there.

As always, thank you all for the continuous support of David Shelley and Bluestone.
David Shelley- Vocals, Guitar, Songwriter

Creating jamming blues rock music that is ancient and modern and truly original, David is the son of a Jazz singer/actress, Martha Stewart, and grandson of Buddy De Sylva, songwriter of “Birth of the Blues”, “Sunny Boy” and the “Best things in Life are free”.
David began his career as a Blues artist in 1990 after touring the world as a guitarist with show business icon, Cher. David has shared the stage with Allman Brothers guitarist Warren Haynes’ band Gov’t Mule, Allman Brothers alumnus Dan Toler, blues artists like Anson Funderburg, Billy Branch, Ronnie Baker Brooks, Tommy Castro, Larry McCray and many more.
Writing and creating his own brand of blues, David uses world rhythms, traditional blues instrumentation and soulful vocals as a vehicle for his songs. His songs call to mind the struggles and joys of real life.
Charles Gasper – Bass

Receiving an electric guitar on his 10th birthday allowed Charles to refine his “ear” and help his musical passion to blossom.

“If there was a song to learn, I learned it note for note, even if it took me all day”.

Albuquerque alternative rock quartet Alien Lovestock provided a platform for his definitive sound and style and allowed for even more exposure after the band relocated to San Francisco. There, Alien Lovestock collaborated and performed with George Clinton, Storm Large, and other luminaries on the band’s sophomore album “Planet of the Fish”. Charles also continued to work with Alien Lovestock alumni Eric McFadden (EMT, Stockholm Syndrome) and Paulo Baldi (Cake, Les Claypool) and later joined up with longtime Bay Area Latin rockers Orixa whose crossover sound of rock/reggae/funk/ska had helped to garner accolades and to establish the band as the premier rock en espanol group in the San Francisco Bay Area. In 2010 Charles relocated to South Florida to join up with long time friend â€œDavid Shelleyâ€ and his Florida based band â€œBluestoneâ€.