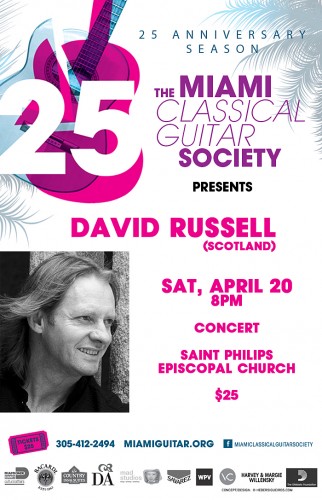 The Miami Classical Guitar Society is very proud to present the final Concert of our 25th Anniversary Season, featuring one of the most renowned, iconic classical guitarists in the world, Scottish/Spanish guitarist David Russell!

David Russell certainly needs no introduction. The legendary, internationally acclaimed GRAMMY award-winning guitarist has had a phenomenal performing and recording career and is reaching for new heights with his recent Baroque album. No matter the genre, Davidâ€™s interpretations serve as references for all who wish to be more complete guitarists, as he occupies a unique position of universal respect and admiration among amateurs and professionals alike. Concert-goers and musical critics alike are amazed by his musical genius and captivating stage presence. His seemingly effortless performances are highlighted by great attention to detail and provocative lyrical phrasing, suggesting an innate understanding of what each individual composer was working to achieve and bringing to each piece an unparalleled sense of adventure. A past winner of virtually every international guitar competition, Mr. Russell is an esteemed Fellow of The Royal Academy of Music in London and in 2003 was awarded the Medal of Honor of the Conservatory of the Balearics and named an â€œadopted sonâ€ of Es Migjorn, the town of his upbringing in Menorca, Spain.

â€œIn the realm of classical guitar, there is a small handful of luminaries whose concerts and recordings have earned them international stature…Scottish-born guitarist David Russell is one of these rare performing artists who has garnered favor with audiences, guitar aficionados, music critics and concert presenters around the world.â€ -Acoustic Guitar Magazine.

This is the third time the MCGS brings Russell to perform in Miami, and we are honored that he will be here to celebrate this anniversary with us! Don’t miss this opportunity to see Maestro Russell in Concert!

Tickets:
$25 general admission at the door, ($20 members/seniors/students with ID). Children under 12 are free. No Reservations needed. Buy tickets online at www.miamiguitar.org

Masterclass:
Russell will also be offering a master class open to the public. Please visit our website for more details.