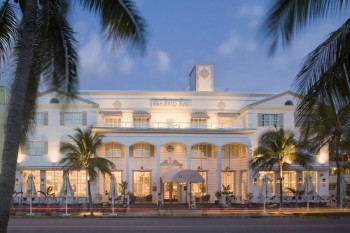 n honor of National Poetry Month (April 2013) and in partnership with O, Miami, the month long festival that celebrates poetry throughout Miami Dade County, The Betsy South Beach has a full slate of events, promotions and interactive activities on tap. Produced by the University of Wynwood with principal support provided by the John S. and James L. Knight Foundation, O, Miami creates a series of events and projects with the simple goal of every person in Miami-Dade County finding a poem during the month of April. As host hotel for O, Miami, The Betsy provides accommodation for out of town poets in its Writerâ€™s Room and in hotel rooms; as well as presenting public readings, salons, parties and the annual Poetry Broadside Exhibition.

The Betsy Writerâ€™s Room, created as part of the hotelâ€™s commitment to cultivating arts and literature programs, funded in part by a Knight Arts Challenge Grant to create a special place on South Beach that inspires writers to do their best work, celebrates its first anniversary in April. Six poets will stay in the room during April 2013 as The Betsy works with O, Miami to champion the power of words including a residency by Inaugural poet Richard Blanco, who read his poem, â€œOne Todayâ€ at President Obamaâ€™s Inauguration in January.

On Monday, April 1st, the literary month kicks off with a series of events, if not poetic in nature, than poetic in spirit, featuring ethics pioneer and author Dov Seidman, who will make special presentations off-property as part of Betsyâ€™s robust community outreach efforts presented in collaboration with leadership from Florida International University and the Miami Dade Public Schools. Seidman is the author of HOW: Why HOW We Do Anything Means Everything; events at FIU are free and open to the public.

Also debuting on April 1, Lamppost Readings (a.k.a. the stoop poetry project). Curated by O, Miami founder, Scott Cunningham, the event will feature poets each evening at 5 PM on the Northeast Corner of the Betsy Terrace to read a poem of their own as well as one from a poet who has inspired their creative work. Readings will be photographed and recorded and will become part of a digital archive, accessible on line. To become a featured reader, contact info@omiami.org

On Thursday, April 4 and Sunday, April 14th at 7 PM in BBar, Betsy will host â€˜Open Micâ€™ poetry, encouraging poets from all walks of life to read their work in the presence of peers and become â€˜an officialâ€™ part of the vibrant regional writing community. O, Miami founder Scott Cunningham will host the April 4th event. To sign up as a reader, contact info@omiami.org, or just show up and sign up to read (first come first served).

On Tuesday, April 16 at 7 PM in Betsyâ€™s event space, B Bar a collaborative reading and conversation: Sylvia Plath and Tradition: 50 Years and Counting will pair Miamiâ€™s resident poet Campbell McGrath with poet Catherine Bowman from Indiana University. Ms. Bowman will stay in the Writerâ€™s Room from April 15 to 19. A â€˜Betsy Salonâ€™ on Monday, April 18th at 10 AM at BLT Steak with Ms. Bowman will be co-hosted by FIUâ€™s Dr. James Sutton as part of an emerging partnership with the Department of English at FIU. Both events are free and open to the public; however salon seating is limited. RSVPs at artsandculture@thebetsyhotel.com for both events.

Also on Tuesday, April 16, Betsyâ€™s annual Poetry Broadside Exhibition opens with a light box display titled Manuscripts: the illuminated broadsides exhibition. Fragments of poems from both contemporary poets who will be in residence at The Betsy during O, Miami and internationally renowned poets with a link to Florida, past and present, will be interpreted by graphic artists and projected on light boxes. Miami artist Andrew Reid is curator and principal designer for the project.

From Thursday, April 25 to Saturday, 27, the Betsy will be hosting a dozen poets in residence, in support of O, Miamiâ€™s efforts to create a three day intensive poetry festival on the beach.

What better way to celebrate allof this literary splendor than with a reading and a party? On Saturday, April 27, O, Miami will present a Global Reading on Roofdeck featuring international visiting poets. The Betsy will then sponsor its third annual Poetry Partay on Roofdeck following the reading, with food provided courtesy of culinary partner, BLT Steak at the Betsy. RSVP to attend this event to artsandculture@thebetsyhotel.com