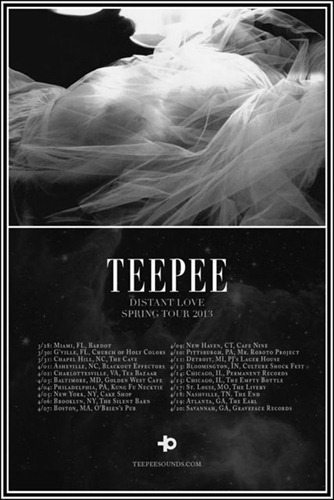 The upcoming tour will support the release of Teepee’s latest album, and continues throughout April with an appearance at Graveface Records in Savannah, GA for Record Store Day on April 20th. Along the way, Teepee will perform with The People’s Temple (HoZac Records), Levek (Lefse Records), Dead Confederate (Old Flame Records), and Purling Hiss (Fan Death, Drag City Records), among others. Please see below for exact dates. The band’s profile continues to rise both locally and nationally: CMJ profiled Teepee on their website in June 2012; BeachedMiami selected Time Meant Nothing as their #1 local single of 2012; and Miami New Times voted Distant Love one of the year’s best local albums.

Please see below for a list of all national dates: