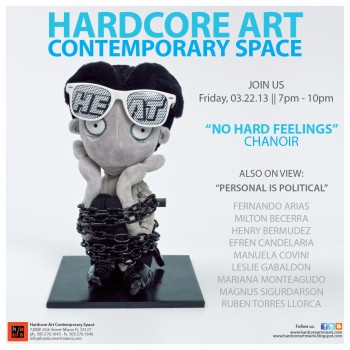 Alberto Vejarano, aka Chanoir, is a Colombian artist raised in France that became known for his graffiti and especially for the iconic cat that in the mid-nineties began to flood walls in different cities in Europe and Latin America. Chanoir studied at the prestigious Ecole des Beaux Arts in Paris where he was a pupil of Annette Messager, Christian Boltanski and Jean Michel Alberola and others. Among his most important exhibits is the one in the main hall of the Cartier Foundation in 2009.

“No hard feelings” questions the basis of unnecessary suffering and tyranny of power undisturbed. It is based on our experience as human beings, our fears, and emotions and how consciousness and society interferes and manipulates our reality. Beliefs are by definition alienating and to start to question is to start being not alienated, suffering is to accept that alienation.

In his works, the chains symbolize impotence and stuffed animals symbolize the carnal and mortal condition of man. The use of these popular characters allows the viewer to feel identified with the subject. By torturing these inanimate beings there comes an inquiry on human instinct and why they feel satisfaction when others are tortured, killed and humiliated. This desire to “revenge” is a recurring theme in humanity. Good and evil are relative but fundamental, as the symbol of yin and yang, which symbolizes the many dualities that make up our lives and govern the balance of life itself.

Who has the power, is the real question on torture. The opposition between victim and villain defines the notion of equality, an unusual equality, who has power and who has the truth? Both the victim and villain feed on each otherâ€™s energy without knowing if happiness is to be bound or loose. Fear is one of the most powerful forces in the world, we, as the knight of the Middle Ages, must separate ourselves from the fears that are not ours and if not, rejoice in our suffering, our compassion that defines us as human beings for anyone who has not suffered is not a man, not a human being. This is an invitation to fear only for our inevitable condition, for have wanted to be gods when we are nothing but animals.