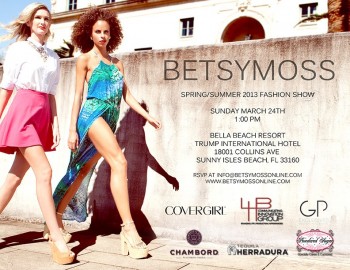 Miami Beach, FL – Founder and Designer Jorge Perez of Betsy Moss an international women’s ready to wear clothing brand that is sold in over a 100 stores worldwide including stores in the United States, Dubai, Turks & Caicos, Canada, Mexico and Puerto Rico to name a few, will present the Betsy Moss Spring/Summer 2013 collection sponsored by Cover Girl Cosmetics at this exclusive, invite-only event held at Bella Beach at Trump International Beach Resort in Sunny Isles, Florida (18001 Collins Ave) on March 24th, 2013 at 1pm during Winter Music Conference and Miami Fashion Week in Miami. This event is also to celebrate the third year anniversary of Betsy Moss! Guest will enjoy cocktails provided by Chambord Flavored Vodka and Tequila Herradura; guest will also enjoy amazing sweets and cupcakes provided by Powdered Sugar. Hair and Makeup provided by GP Exclusives.

Beauty Queen and Supermodel Agueda Lopez will grace the Betsy Moss Spring/Summer 2013 runway, International press and celebrities such as TV Personality Lisa Morales will be in attendance at the beach side runway show this Sunday.

For more information on this event or to be added to the guest list please email info@betsymossonline.com.

Betsy Moss is a fashion house that was founded by President and Head Designer Jorge Perez. Named after his sister and muse Betsy Perez.

Hailing from Venezuela, Jorge was always moved by the elegance of women. He has always desired to express his creativity through fashion. After high school Jorge quickly delved into the fashion world and was able to apprentice as both a junior designer as well as assistant to the head designer for an established fashion house. This opportunity allowed him to grow in his understanding of materials, fashion, quality, fit and the business of fashion.

Together with a great team Jorge continued experimenting and creating this now world renowned brand. What once started as a locally recognized boutique brand has now expanded and is being sold in stores world wide, spanning the United States, Mexico, Puerto Rico, Turks & Caicos, Cayman Islands, Dubai, Canada and many more. Betsy Moss is now recognize as a glamorous but yet affordable international clothing brand with chic and fabulous figure flattering pieces.

Perez believes there are no limits as to what they can accomplish. Jorge’s plans for the MOSS brand will include a menswear collection, accessories, fragrances and home goods. Jorge want’s to cater to all aspects of design and glamour and is very excited to imbue the Betsy Moss style into women and men’s closets as well as their homes around the world.

Ex beauty queen and Supermodel from Cordoba, Spain, who put her tiara aside to pursue her modeling career. Agueda’s destination was Miami, Florida, a place she now calls home with her beautiful family.

For more on Agueda Lopez visit her website at www.agueda-lopez.com

Lisa Morales is a TV Personality, Model, Actress, and Spokeswoman, featured in some of the most affluent Television Networks, Fitness, and Modeling forums, Lisa got her first big break with a JC Penny Ad that appeared in Seventeen Magazine. In 2006, Lisa appeared on Univision’s popular TV Program, Caliente, which featured some of the most prominent Latin Artists from around the globe. Lisa competed in their international contest “Super Chica Caliente”, winning with an impressive 2 million votes. Lisa was chosen to compete in “Model Latina”, a reality series on SiTV that was the first modeling competition of its kind to feature Latina Models from around the US. That single opportunity on Model Latina propelled her into success that has since given her enough exposure to model full time. In 2010, Lisa was chosen to host the Mercedes Benz Fashion Week, report at the Latin Billboard Awards to name a few.

The Model was voted Top 10 Maxim’s “Hometown Hotties” winning by popular votes. Featured in several Maxim Issues to follow, Maxim then hired Lisa to Host the Maxim’s Superbowl Party 2011 which was featured in DecoDrive, NBC Miami, and Telemundo. This allowed the model to transition to becoming a Maxim Host and Spokeswoman sending Lisa to cover “Maxim Spring Break 2011 Panama City.

Lisa is currently the face of HotMiamiStyles.com, host on Nitido on Telemundo and the host of the reality TV Show “The Search for the Ultimate Miami Girl”.

For more on Lisa Morales visit her website at www.lisamorales.net