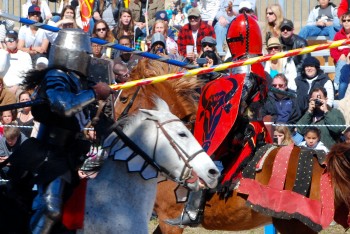 A fairy taleâ€™s spell is set to embark upon Miamiâ€™s Cauley Square Historic Village when the Florida Renaissance Festival returns on March 30 to April 14, 2013. While entering the magical kingdom of the Florida Renaissance Festival, patrons will experience the Days of Yore, indulge in entertainment fun from the renaissance period, satisfy their medieval palate with authentic food fare and drinks followed by rides, and games of skill and chance.

Back due to popular demand, Predators Unlimited show, showcasing exotic animals, such as tigers, lions, black bears, alligator and crocodiles, monkeys and snakes. The show is highly entertaining delivering an important educational aspect of the renaissance period in which the audience learns about each animal, their background, and their role during the 16th century.

The Florida Renaissance Festival at Miamiâ€™s Cauley Square Historic Village will be open weekends beginning March 30th from 10 a.m. to 7 p.m. until April 14th. Prices range from $20.00 for adults and $7 for children ages 6 to 11 years of age. Children 5 and younger are free. Special seasonal passes are available for $39 (valid all three weekends) and group ticket discounts are also offered.