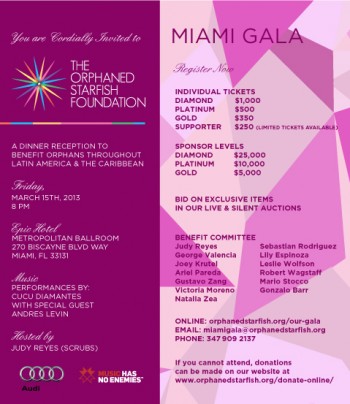 The Orphaned Starfish Foundation (OSF), an internationally-recognized nonprofit organization that provides computer vocational training for orphans and disadvantaged children throughout the developing world, will celebrate its 12th anniversary on Friday, March 15th, with its first Annual Miami Fundraising Gala at the Epic Hotel in downtown Miami.

This is the New York City-based Foundationâ€™s first fundraising event in Florida and it will honor
orphaned, impoverished and disadvantaged children throughout the world. Two, young HIV-positive girls from the OSF program in Cali, Colombia are being flown in as guest honorees.

â€œScrubsâ€ Judy Reyes will preside as the mistress of ceremonies and live entertainment will be provided by Grammy nominated Cuban-American singer, song writer and actress Cucu Diamantes accompanied by a 10-piece band.

The Gala is sponsored by Audi, E Tech and Makar Properties, among others.

Tickets can be purchased at http://www.orphanedstarfish.org/our-gala/.