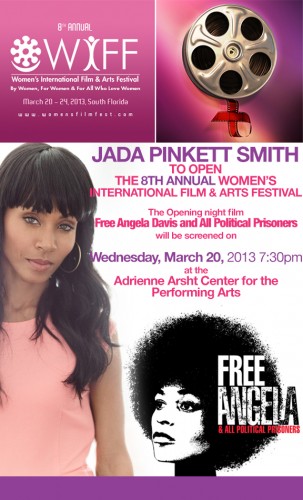 Join Jada Pinkett-Smith as she kicks off this yearâ€™s festival with a red carpet Florida premiere presentation of her documentary film “Free Angela Davis and All Political Prisoners”. It will be the only opportunity to see the film in a Florida theater as this film will only be playing in seven other select cities nationwide. This opening night screening with Jada Pinkett Smith is a rare treat!

Free Angela tells the dramatic story of how a young professorâ€™s social justice activism implicates her in a botched kidnapping attempt that ends with a bloody shootout, four dead, and her name on the FBIâ€™s 10 most-wanted list. In this historical vÃ©ritÃ© style documentary, marking the 40th anniversary of her acquittal on charges of murder, kidnapping, and conspiracy, Angela Davis recounts the politics and actions that branded her a terrorist and simultaneously spurred a worldwide movement for her freedom as a political prisoner.

Get your VIP tickets and join us for a private reception to the show! Proceeds from the event will benefit WIFFâ€™s â€œReel Girls: Real Womenâ€ media literacy and filmmaking program for girls-at-risk.