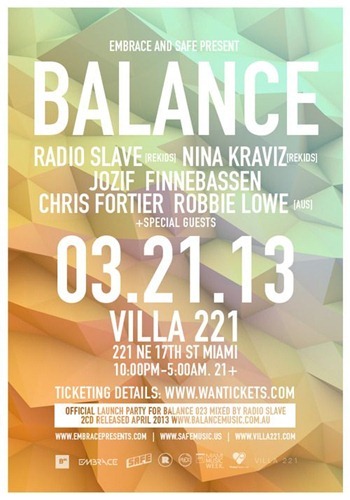 Balance Music, the renowned label behind the Balance mix compilations and their newly-anointed ‘Balance Presents’ series, are hosting a very special party during Miami Music Week this year. The event will include a performance by jozif, who recently released Balance Presents jozif, and Radio Slave, the artist behind the upcoming mix Balance 023: Radio Slave. Held at exclusive location Villa 221 (221 NE 17th St.), the night will also boast sets from Nina Kraviz, Finnebassen, Chris Fortier, Robbie Lowe and special guests.

jozif is the first DJ to release a Balance Presents mix. The new series was founded to highlight the best emerging talent in the world of electronic music, and they have found an artist up to the task. His thoughtful, emotive and enrapturing mix of deep house shows an intelligence and ability beyond his years. The mix will be available in North America on March 5, and is currently available now in all other territories.

Radio Slave, a long-standing name in the electronic music world, is now officially announced as the creator behind Balance 023. The project came about as a way for him to celebrate his 20th year of DJing. He recently described his concept to Balance Music, saying:

"The concept is to pull together the records that have really stood the test of time and also the records that were the ‘real moments’ from each year. Some of these are underground hits, others forgotten gems that club kids and DJ’s from now should really know about and enjoy. Going from my early years as a resident at Ministry’s "Open all Hours," where I played everything from ambient to techno, to my DJ sets with Joel Martin as Quiet Village where we played Led Zeppelin at festivals such as the Big Chill, to the heady nights at the Panorama Bar and Berghain which are still on-going, I wanna present the best of the best and try and piece my music journey together from the last 20 years."