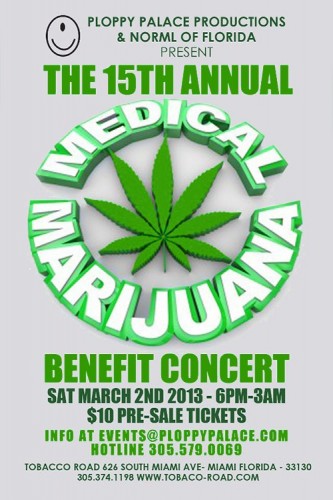 Things will light up at the beginning of March when the 15th Annual Medical Marijuana Benefit Concert comes to Tobacco Road. The annual event, hosted by Ploopy Palace Productions and NORML of Florida will raise funds for NORML of Florida, Patientâ€™s Out of Time, People United for Medical Marijuana (PUFMM), and The Silver Tourâ€™s medical marijuana campaign and the protection of patientsâ€™ rights.

Currently there is a statewide campaign to change the medical marijuana laws in Florida including a petition and legislation in both the House and Senate. As a part of March 2nd extravaganza, there will be three stages for various bands and spoken word artists, all joining together under the marijuana cause. The genre of music will range from folk to reggae, hip-hop to jazz and everything in between.