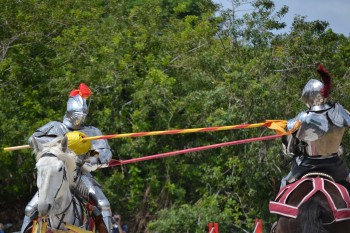 A mix of old favorite characters and acts return, such as the Mud Show, Moonie the Magnificent, Washing Well Wenches, Celtic Mayhem, Harper & the Minstrel and others. New popular additions include Jacques Ze Whippeur, dangerous, comedy, romance act, which was one of the featured performers with the legendary Big Apple Circus; The Lost Boys, a cult favorite performing an energetic mix of traditional music and classic rock; Danny Lord, the Lord of Mischief bringing an unpredictable talent of silent clowning and magic; Lords of Adventure, comedy and swordplay fulfilling stories of adventure and a new full cast musical based on Shakespeareâ€™s â€œA Midsummerâ€™s Nights Dream.â€

The Florida Renaissance Festival at Deerfield Beachâ€™s Quiet Waters Park will be open weekends beginning February 9th from 10 a.m. to sunset (including, Monday February 18th, Presidentâ€™s Day) until March 17th. Prices range from $20.00 for adults and $7 for children ages 6 to 11 years of age. Children 5 and younger are free. Special seasonal passes are available for $65 and group ticket rates are also offered.