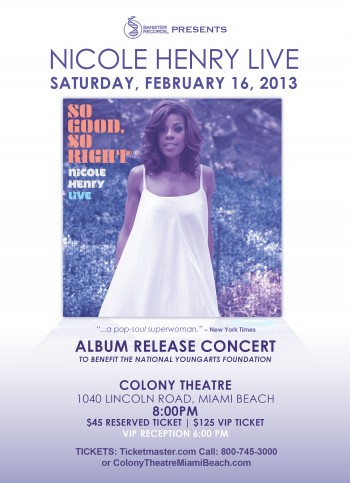 Miami based and internationally acclaimed jazz pop vocalist Nicole Henry will offer her hometown fans a musical treat when she performs a special album release concert at the Colony Theatre on Saturday, February 16. The concert will benefit The National YoungArts Foundation and celebrates Henry’s new album SO GOOD, SO RIGHT: NICOLE HENRY LIVE to be released on Jan. 29 on Banister Records. The event begins with an exclusive VIP reception at 6pm that includes premium reserved seating at the concert, a â€œSo Good, So Right” autographed CD, a pre-concert party at the Colony Theatre including complimentary hors d’oeuvres and an open bar featuring the “So Good, So Right” Cocktail, and a post-concert party at the Betsy Hotel. The concert will be hosted by WDNAâ€™s Michael Valentine and begins at 8pm. The concert begins with a performance by a YoungArts fellow, followed by a very special Nicole Henry performance featuring songs form her new CD. The 13 track live album showcases soulful inspired interpretations of some of her favorite classic hits of the decade from iconic artists including Bill Withers, Aretha Franklin, Joni Mitchell, James Taylor, The Commodores and Gladys Knight. Henry has toured over 15 countries and her international acclaim includes three TOP-10 albums on U.S. Billboard and HMV Japan jazz charts. MIAMI HERALD critic Jordan Levin has raved saying jazz singer Nicole Henry seems “â€¦a paragon of perfection…the vocal love child of Whitney Houston and Sarah Vaughan”.