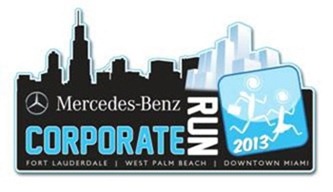 As South Floridians ring in the new year and pledge to make their health a priority, TeamFootWorks, producers of the Mercedes-Benz Corporate Run Series, is excited to announce the 2013 5K Run/Walk race dates and welcome the seriesâ€™ new benefiting charity, United Way. Having attracted a record breaking 29,000 participants in 2012, the race series will once again take over South Florida with three runs beginning in Fort Lauderdale on April 4, continuing in West Palm Beach on April 17 and concluding in Miami on April 25, with a portion of the proceeds to benefit United Way. Registration for each run is now open.

"United Way is committed to the health and wellness of its employees and the various communities it serves,â€ said Harve A. Mogul, president and CEO, United Way of Miami-Dade. â€œThe health and wellness of others impacts us all. When individuals have the opportunity to better health, the full potential of our young people is realized; business productivity increases, health care costs are lowered and we all win. Weâ€™re honored to be involved with the Mercedes-Benz Corporate Run series and look forward to working with TeamFootWorks to help transform peopleâ€™s lives and create healthy communities throughout South Florida.â€

The Mercedes-Benz Corporate Run Series attracts more than 1,100 South Florida Companies and incorporates a special competition to award the overall menâ€™s, womenâ€™s and co-ed teams in 20 different industries. The run is open to employees of businesses, corporations, government agencies, financial institutions and non-profits â€“ regardless of company size. Known as â€œFloridaâ€™s Largest Office Partyâ€, everyone is encouraged to participate and join their company team to walk or run as a group. Beginners can â€œease into exerciseâ€ with friends, gain inspiration and motivation to continue walking and running to improve overall health, while competitive runners have the opportunity to shine amongst their co-workers and lead the corporate team to victory. Often this is the first step towards greater health and wellness amongst South Florida employees and their companies.

â€œWhether the race series is your first step toward fitness or an office tradition, the Corporate Run is about having fun, getting healthy and boosting company morale,â€ said Laurie Huseby, race director, Mercedes-Benz Corporate Run. â€œThe benefits of adding fitness to your life are numerous and weâ€™re proud to be committed to that process for more than 28 years.â€