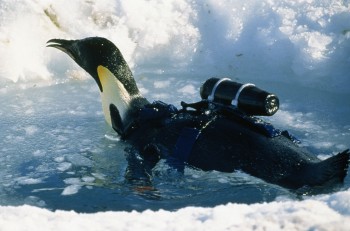 Swim through tropical landscapes with turtles, dive beneath the ice with penguins and forage in the forest with a family of bears â€” experience life as animals do in a new traveling exhibition opening at Zoo Miami.

â€œNational Geographic Crittercam: The World Through Animal Eyes,â€ a 6,000-square-foot traveling exhibition developed by the National Geographic Museum in Washington, D.C., will run from January 18 through May 5, 2012 at Zoo Miami. Crittercam, invented by National Geographic marine biologist Greg Marshall, is a scientific video- and data-gathering tool safely worn by wild animals, offering researchers insights into animal behavior and clues to protecting animals and the world we share.

Through interactive displays, firsthand footage and evocative environments, visitors to the exhibit can explore the many stories and animals that are part of the science and adventure of Crittercam. The exhibit focuses on Crittercamâ€™s deployment on seals and sea lions, sharks, sea turtles, whales, penguins, bears and lions.

In the seals and sea lions section, a series of viewing and listening stations show how these animals communicate, hunt, feed, care for their young and attract mates. Visitors then move to the sharks section for a close-up view of an 18-foot-long great white shark model and displays that illustrate the hunting and migratory behaviors of several shark species. A shark fin model features the latest way of attaching the Crittercam â€” via a fin clamp. As visitors feel the rough sandpaper that keeps the clamp in place, they can watch a video depicting daring deployments, from early tether systems to a researcher deploying the fin clamp by hand.

The sea turtles section offers insights into how turtles search for mates, different foraging behaviors and how the animals avoid becoming a meal themselves. From atop a life-size model of a leatherback, children and adults can watch point-of-view footage from a female leatherback, while other displays show life as seen by loggerhead and hawksbill turtles.

In the whales section, visitors enter into a chamber of bubbles to see the cooperative behavior of humpbacks known as bubble net or lunge feeding. Other highlights include an up-close look at the toothed whales of Hawaii and footage of the mysterious â€œunicorn of the sea,â€ the narwhal.

In the penguin pod, exhibition-goers enter the world of Penguin Ranch, the main research site of the Crittercam team in Antarctica, to investigate a penguinâ€™s life beneath the ice and learn about research with penguins trained to wear Crittercam. Visitors can squeeze into an observation tube to watch a video of penguins soaring underwater, while youngsters can crawl through a tunnel and pop up in a bubble to come face-to-face with a penguin wearing a working Crittercam. On exiting the tunnel, children can view footage of themselves from the penguinâ€™s perspective.

The terrestrial version of Crittercam is the newest development in the program. In the land animals section of the exhibition, visitors learn about the trial-and-error process of developing the land-based technology, from deployments on domestic dogs and cats to partnering with animal rehabilitation centers. Visitors also learn about the unique challenges of studying land animals, from penetrating the dense forest habitat of the grizzly bear to getting the Crittercam collar to pass the lion cub â€œchew toyâ€ test. Point-of-view footage shows a young Alaskan bear cub napping, feeding and traveling with its family, as well as a lioness hunting, tending to her cubs and sharing a meal with them.

The final section of the exhibition focuses on Crittercam technology, with information on how it works and the original inspiration that led to its development. Visitors can design their own Crittercams using Build-a-Cam, touch a Crittercam model and examine deployment methods such as an adhesive patch, penguin harness and suction cup. Youngsters can try their hand at a Crittercam puzzle. There is also a â€œWhat’s Newâ€ kiosk that features recent deployments and findings on species such as the tree kangaroo and Humboldt squid.