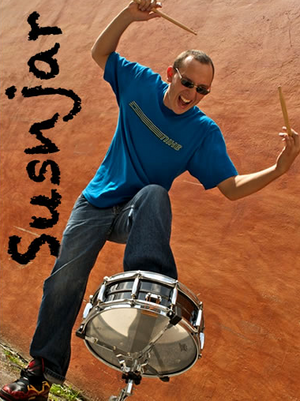 At age 17, Daniel won best drum soloist in Western Australia (1998) and earned runner up in Australia’s Best Up and Coming Drummer competition in 2002. Daniel relocated to the USA in August 2008 to undertake his Master of Music degree on full scholarship from the Frost School of Music at the University of Miami. A Henry Mancini Institute fellow, he is also a Teaching Assistant and member of the Frost School of Music Concert Jazz Band which won the 2010 Downbeat Award for Best Graduate Level Large Ensemble. Daniel recently completed his Masters and will be returning to the University of Miami shortly to begin the Doctor of Music Arts program. He holds a Bachelor of Music in Jazz Performance from the Western Australian Academy of Performing Arts (WAAPA) and was on faculty up until relocating to the United States.

The 2008 Perth Jazz Society commission was awarded to Daniel for the creation of a 60-minute original work influenced by ethnic music from Spain, Mali, Hungary and Egypt. The live performance of this work was recorded on location by the Australian Broadcasting Corporation in June, and was broadcast nation-wide on ABCâ€™s Jazztrack radio program.