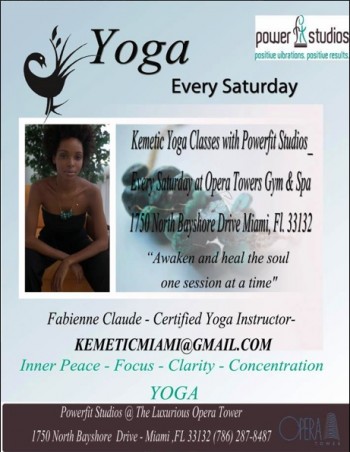 Kemetic Yoga is unique because it is the indigenous system that was developed in Africa. Thus Kemetic Yoga is a vast ocean of wisdom that was originally created to lead human beings to a realization that goes beyond the material expression of matter. What is meant by this is that the teachings are to lead a human person to a state of awakening that is referred to as the Nehast. The word literally means to awaken, thus the implication being to awaken to ones true nature, pure Divinity, beyond objectification.

(Starting January 12th, 2013)
It is known that it should take a minimum of 2 months for a person to be accostummed to a new way of living. You will be signing up for a 6-8 week course with your first class being FREE.
* 2 FREE YOGA Classes WITH 8 week session ONLINE PURCHASE (pass given with reciept)
Per Class: $12.00
8 Week Session: $60.00
6 Week Session: $50.00
LIMITED SPACE to 15 people per session
www.kemeticyogamiami.eventbrite.com

What is Kemetic Yoga
Kemetic Yogaâ„¢ is the ancient Egyptian system of Yoga enlightenment based upon the practices of physical movements combined with controlled deep breathing and meditation. Kemetic Yoga emerges from the one of the oldest known civilizations, which is ancient Egypt properly called Kemet in Northeastern Africa. Kemetic Yogaâ„¢ was developed by studying, translating and interpreting the commonly called hieroglyphic texts of Kemet (ancient Egypt) and the images of Yogic postures that are clearly pictured on the walls of the Kemetic temples.

Yoga is the Practice of Binding Individual Consciousness with Universal Consciousness
In the Kemetic teachings, this process of yoga is called Smai Tawi which means UNION OF THE TWO LANDS, an explanation of the higher and lower nature within the human entity.It shows how every human being is composed of a higher nature and a lower nature. The practice of Smai Tawi is to unite the lower with the higher; in effect, the same understanding comes through from the word yoga.