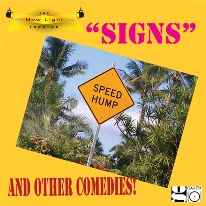 Itâ€™s a SIGN! See the Boat Parade and our show! This is the sign youâ€™ve been waiting for; â€œSigns and Other Comediesâ€ adds a Sunday Matinee!

Due to Popular Demand and the Fort Lauderdale Boat Parade the New Light Theatre is proud to present an additional performance of their newest production â€œSigns and Other Comediesâ€ Original One Act Comedies by Wendy White, Vanessa Garcia and Elaine Alonso-Cruz

How Signs and other Comedies came to be:

â€œCan we truly judge a book by its cover? Depending on the Sign can you see a miracle? â€œSignsâ€ and Other Comedies explore these questions and more,â€ states the playwright and director Wendy White. â€œBased on a premise that a picture can say a thousand words, the playwrights were given a prompt of the name of sign and asked to write an entire play based on the sign they chose – resulting in comedic one act plays and monologues reflecting the signs of our times in the most unexpected places.â€

The playwright and director, Wendy White has written over 125 one-act plays and was a resident playwright, curator and director at the Kraine Theater in the East Village of New York City from 1984 to 1992, and at the Expanded Arts Theater Company from 1994 to 2001, in the Lower East Side of New York City. Her off-Broadway productions are the base for her new venue at the New Light Theatre. She recently produced her one woman show; The Jewish Nun to sold-out audiences in Off-Broadwayâ€™s 59e59 Theatre and at the Edinburgh Fringe Festival in Edinburgh, Scotland.

Adam White, Gallery owner, Gallery 101 went to see â€œWho Could Have Predictedâ€ in Miami in May 2011 at Wynwood’s GAB studio and decided to offer Wendy a permanent home in his Fort Lauderdale gallery surrounded by cafes, restaurants, boutiques and other galleries. “Wendy and New Light Theatre will be able to cast plays every month and have a solid home base from which to create. We are very excited to have her here; she is an immense talent that promises to get even bigger and better with this wonderful associationâ€ states Adam White, Gallery owner, Gallery 101(www.gallery-101.com).

Wendy White would like to thank the wonderfully talented playwright Vanessa Garcia, Artistic Director of Krane, Inc. for all her support in the process of developing Signs and Other Comedies – In 2010, Garcia, the Founding Artistic Director of Krane, Inc. was named one of Miami’s 20 Under 40 by The Miami Herald for her work in theatre. For more information about Garcia, please visit: www.vanessagarcia.org

The dream team includes the fabulous playwright, Elaine Alonso-Cruz who is joining us with her brand new comedy “Full Speed Ahead!”