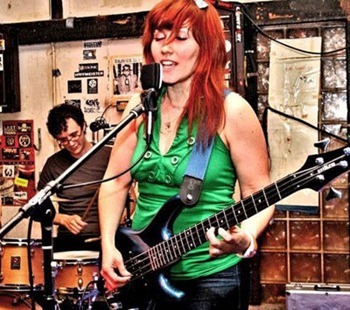 Matching Set: Last year Pocket of Lollipops duo Maite and Tony brought you the mind-expanding Cashmere Kitty. This year, they are joining forces with Verge Art Fair for their opening night Art Party to produce Matching Set, an unruffled line up of musical acts Datamouth, Cog Nomen, Pocket of Lollipops and DJ Jiriki.

Posh Punk Duo Maitejosune Urrechaga & Tony Kapel from Pocket of Lollipops bring to you another combination of their artshmaltz. These two have been know for their installations and music performances together. Individually Maite is a visual artist and Tony is a writer. When these two forces combine they marry iconic tones. Past events have included: “Cashmere Kitties,” “Snowcone in the Stairs,” “It’s Okay to Cross now,” and “The Halls Ways.” These events have ranged from Live Paper Ball Fights, feeding the audience lollipops, and creating and coloring masks to chase snails. For this special performance, Maite describes her goal as helping the audience to “imagine drizzles steel pressing themselves into your being.”

Datamouth is the moniker of Chris Salazar, an artist and musician originally from Santiago, Chile who currently lives in Miami, FL. Salazar’s musical background is diverse: guitarist in the influential South Florida punk band Milkshed in the 1990’s and early 2000’s; guitarist in the instrumental rock band Vidavox (described as an amalgam of jazz, progressive rock, jam band, & math rock) in the early-mid 2000’s; and performer/collaborator in various other musical projects. Additionally, video game soundtracks and Freestyle music were among the earliest electronic influences on Salazar. His approach to electronic music is atypical in that his tracks often evolve from melodies written on guitar. Although Salazar is a senior art director professionally, outside of work, he continues to work in art by constantly drawing, designing, photographing + film-making, and creating music.

Cog Nomen is made up of Guitarist, Buffalo Brown and drummer, Brave Ulysses, both of whom have been staples in the Miami live music scene for a better part of the last decade. Cog Nomen’s music is part electro-pop with an good dose of psychedelic ambient rock-scapes (Imagine Pink Floyd jamming with Daft Punk at Brian Eno’s house). Each of their songs constructs a familiar place with spry rhythms, lush textures and engaging hooks without the safety net of plug-ins or pre-recorded sequences favored by laptop musicians. Their debut album Even The Odd was recorded live during the summer of 2011 while facing each other in the recording studio. Recently they have been at it again with their unique twist of psychedelic and pop music- releasing their second album titled “The End Of Knowing (As We Know It)” in CD and MP3 format on August 1st. The Cog Nomen sound is so raw yet refined that its instantly familiar while exuberantly fresh and unpredictab

JIRIKI JiRiKi is an Atlanta based artist who grew up playing in different psychadelic jam bands, then enrolled into the electronic music production program at SAE institute in Miami which paved the way to her first EDM project as JiRiKi, which started in July of 2011. Sets and production include a fusion of Dubstep, Drumstep, Drum and Bass, Electro, Trip Hop, and Glitch.