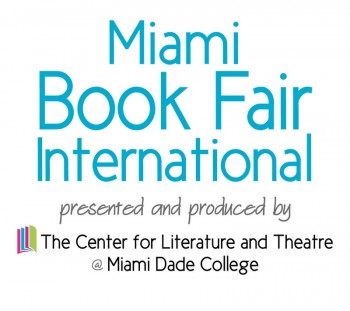 The 29th edition of the nationâ€™s finest and largest literary gathering, Miami Book Fair International, presented by The Center for Literature and Theatre @ Miami Dade College (MDC), will take place November 11 â€“ 18, 2012. The always-popular Street Fair includes more than 200 exhibitors from around the country selling books in a festive atmosphere.

The Fair, MDCâ€™s flagship cultural event, will treat book lovers to eight days of cultural and educational activities, including the beloved Evenings Withâ€¦ series, the IberoAmerican Authors program, myriad learning activities for children, and programs for food enthusiasts in partnership with the collegeâ€™s Miami Culinary Institute. 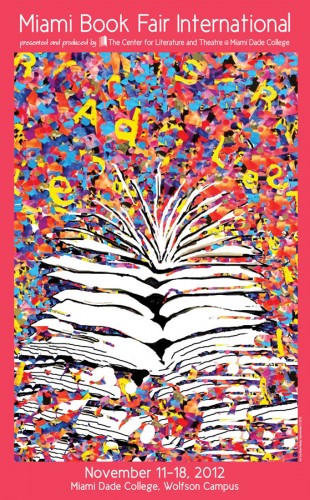 Back again this year is the fall edition of The Miami Writers Institute, with workshops taught by novelist Margot Livesey, literary agent Kimberly Witherspoon, and award-winning author Teresa Dovalpage with a workshop in Spanish, among others.

This year, the Fair continues to expand its childrenâ€™s programming with Generation Genius Days, a component for toddlers, children, tweens and teens to explore, discover and learn through reading and writing, storytelling, art-making, music and theater. Age-appropriate, book-inspired activities will be offered, and will include a â€œmusical petting zooâ€, where kids can handle instruments; map-making and star-gazing; junior engineering projects and science experiments; creative writing and theater workshops, computer storyboarding for comics and cartoons, and other activities that can lead to learning and discovery in the various subject areas, such as English, math, history, geography, the sciences, the visual arts and others. An additional day of author readings for students on field trips is now on the schedule, as well as a fourth day of readings, storytelling and entertainment on the two childrenâ€™s stages.

The Fair also continues special programming for educators with the day-long School of Comics and Graphic Novels — a series of workshops on how to use comics in the classroom–and adds workshops on how to teach creative writing to K-12 students. Miami Book Fair International 2012 promises to be another exceptional literary event!

Miami Book Fair International is the largest and is regarded as the finest literary gathering in America. It is the premier event of The Center for literature and theatre at Miami Dade College. The Center promotes reading and writing throughout the year by consistently presenting quality literary activities open to all in South Florida. Literacy projects target children of all agesâ€”from kindergarten to high schoolâ€”as well as college students and adults. Established and emerging writers from South Florida and all over the U.S. read, lecture, and teach workshops. They work with K-12, MDC students, and diverse members of the community, helping to deepen their understanding of literature, and encouraging their work of writers at all stages of development. The Center envisions South Florida as a nexus of literary activity in the Americas and beyond, and will continue to champion its mission of promoting the advancement and appreciation of the literary arts in all forms.

Miami Dade College has a long and rich history of involvement in the cultural arts, providing South Florida with a vast array of artistic and literary offerings including The Miami Book Fair International, The Florida Center for the Literary Arts, The Miami International Film Festival, the MDC Live! performing arts series, The MDC Tower Theater Cinema Series, the Miami Leadership Roundtable speakersâ€™ series, the National Historic Landmark Freedom Tower, numerous renowned campus art galleries and theaters, and the nationally recognized School of Entertainment and Design Technology. With an enrollment of more than 174,000 students, MDC is the largest institution of higher education in the country and is a national model for many of its programs. The collegeâ€™s eight campuses and outreach centers offer more than 300 distinct degree programs including baccalaureate, Associate in Arts and Science degrees and numerous career training certificates leading to in-demand jobs. MDC has served nearly 2,000,000 students since it opened its doors in 1960.