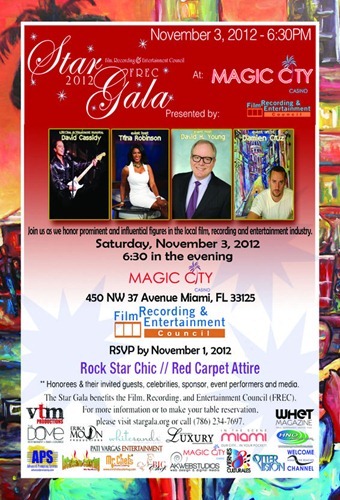 â€œWe are excited to be the home of this star-studded event and are proud to recognize the 2012 FREC Lifetime Achievement Award Recipient, David Cassidy,â€ says Scott Savin, Chief Operating Officer of Magic City Casino. â€œIt will be great to see all of Davidâ€™s professional and charitable achievements honored at this event.â€

The event artist, Damien Cruz, was recognized by Florida Gov. Rick Scott in 2011 to represent the state as the featured artist for the 2011 National Hispanic Heritage Month Celebration in Florida. Cruzâ€™s colorful illustrations blend his memories of Cuban landscapes and his reflections on the land of opportunity.

The FREC Lifetime Achievement Award is given to individuals who have made a significant impact to the entertainment industry. To that end, David Cassidyâ€™s diverse and long lasting career as a performer is a perfect example of this goal. Cassidy is best known for his role as Keith Partridge in the 1970â€™s sitcom â€œThe Partridge Family.â€ The year â€œThe Partridge Familyâ€ premiered, Cassidy had the #1 selling single of the year, â€œI Think I Love You,â€ and record of the year, The Partridge Family Album. As a performer, Cassidy garnered multiple Grammy nominations and won a Golden Apple Award. Cassidyâ€™s records have sold well over 30 million copies worldwide and have been recognized with over 24 gold and platinum recordings, including four consecutive multi-platinum LPâ€™s. In 1999, Cassidy was named â€œBest All Around Performer,â€ â€œEntertainer of the Yearâ€ and â€œShow Star of the Yearâ€ for his role in â€œThe Rat Pack Is Backâ€ by the Review Journal’s Best of Las Vegas. In addition to performing, producing, writing and recording, Cassidy is also an active spokesperson for the Alzheimerâ€™s Research and Prevention Foundation (ARPF) and related organizations.