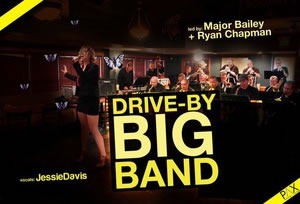 Drive-By Big Band is a professional 18 piece big band that was formed by Ryan Chapman and Major Bailey in 2009 to promote jazz big band music in the metro Atlanta area. This group is comprised primarily of Atlantaâ€™s top professional musicians and incorporates a number of talented college students in order to enhance the overall sense of community among local artists. Ryan and Major were both awarded the opportunity to continue their education at the University of Miami and decided to create an incarnation of Drive-By Big Band in South Florida based on the same principles as the original.
SAM SAVAGE BAND
Sam Savage attended VCU in Richmond, VA as a Jazz Studies Major. Sam has been playing professionally for about 13 years. While in Richmond, Sam spent time playing in bands like: The Devilâ€™s Workshop Big Band, Oregon Hill Funk All- Stars, Sambaosis, NoBS Brass Band, Gray-V, and his own group SavageJazz.