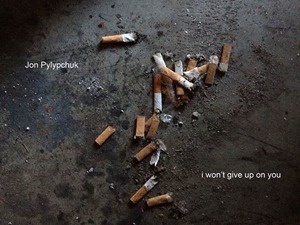 Fredric Snitzer Gallery is pleased to announce the opening of an exhibition of new work by LA-based artist Jon Pylypchuk.

For his second solo exhibition at the gallery, Pylypchuk presents an installation of 85 sculptures and 10 small works on paper.  Deploying the logic of commodity critique within the space of theatrical installation,  cardboard forms, carefully spray-painted to resemble discarded cigarettes, stand on end in groups clustered  throughout the exhibition space.  Standing between 12 and 36 inches tall, the mimetic forms begin to take on anthropomorhipic silhouettes.

In this particular body of work, Pylypchuk has chosen signifiers of intentionality and mimicked them in sculptural form to thematize the material surplus of 20th century avant-garde practices.  If readymades  were a sort of 20th century social contract, offereing not-so-subtle advice on how to behave and look in accordance with a generalized social and moral code, cigarettes were momentary breaks with this contract.   Cigarettes condensed the more unruly aspects of subjectivity into disposable, micro intentionality signifiers.  In their dumb enactment of virtualization (a solid to a gas), they commemorated the loss of the avant-garde’s most cherished site of identification, its liquid reservoir of reflection, and inserted brief interruptions into the march of post-Fordist labor time.  The appropriation of the cigarette by the culture industry as lifestyle accessory, suggests that, contrary to popular belief, the melancholic character is one of the readymade’s intended users.

Pylypchuk’s work displays an impoverished and, in this case, dessicated, vernacular.  By populating the  traditional space of sculpture with readymade content, Pylypchuk places each on the same plane of  production.  Yet, Pylypchuk’s criticism of the commodity form has less to do with reified social relations than with its affective register.  The studio is conceived as a space to both bind and unbind the relation between the readymade and the body, the way the former structures the psychology of the latter.  There is a figurative quality to the sculptures, indicating that hyperreal anthropomorphism and discursive compression are one and the same process.

As with his previous bodies of work, Pylypchuk employs reflexive material procedures alongside a logic of consumerist selection to occupy the territory between use, display, and refusal.  These oversize and numerous works find antecedents in the positions of Arte Povera, post-Minimalism and Group Material as well as the material strategies of a legacy of artists as diverse as Piero Manzoni, Claes Oldenburg, Haim Steinbach, John Miller, and Mike Kelley.

Jon Pylypchuk was born in 1972 in Winnipeg, Manitoba, Canda and has been exhibiting his work since 1999.   He has had recent solo exhibitions at Tomio Koyama Gallery, Tokyo, Hussenot Gallery, Paris, and was in the 18th Biennial of Sydney.