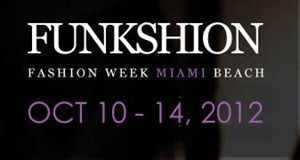 As with every season, since the inception of Funkshion, we allow the general public to attend free of charge to all shows.
RSVP Required at:  www.fashionweekmiami.com  or  www.funkshion.com

Wed, Oct 10th    – The Tents
8pm       Nicole Miller
Fashion Group Internationalâ€™s (FGI) President, Margret Hayes will be presenting Nicole Miller with FGIâ€™s Lifetime Achievement Award, as well as being honored with a â€œkey to the cityâ€ from The City of Miami Beach.  Following the award ceremony, there will be a retrospective showing of Nicole Millerâ€™s collections over the past 30 years of her career.

Thursday, Oct 11th   – Studio 743
9pm       Etienne Jeanson Couture (Paris France), presented by European Fashion District
Etienne Jeanson is a young French designer originally from Lille. He is a student of Haute Couture. After working for houses such as Christian Dior, Yves Saint Laurent, Junko Shimada or Tsumori Chisato, he continued his apprenticeship with Anne Valerie Hash, Christian Lacroix and Plumasserie (feather design) with Mr. Legeron. His passion for history puts him in perpetual opposition between baroque and classicism which is the starting point of this collection.

Friday, Oct 12th   – The Tents
8pm       Guria Swimwear presented by Sensa
Guria Swimwear was in launched in 2007 by Camila Ckless,  a â€œguriaâ€ (â€œgirlâ€ in Brazilian slang) who decided to follow her heart and create a line inspired by her love for the beach and fashion.  The contemporary line encompasses a line of sophisticated and body flattering silhouettes in a wide range of sizes and shapes in order to create the perfect bathing suit for all body types.

9pm       Red Dress Campaign
Now entering its 8th year, Go Red For Women is the nationwide campaign of The American Heart Association (AHA) to create awareness surrounding Americaâ€™s #1 killer of women – Heart Disease. The event will showcase red dresses on the runway created and donated specifically for this show by some of the worldâ€™s top fashion designers.  These dresses will then be auctioned off with all proceeds going to the AHA.  Designers include:  Oscar De La Renta, Donna Karan, Nicole Miller, Carolina Herrera, Custo Barcelona, Etienne Jeanson Couture, Angel Sanchez, and Gustavo Cadile