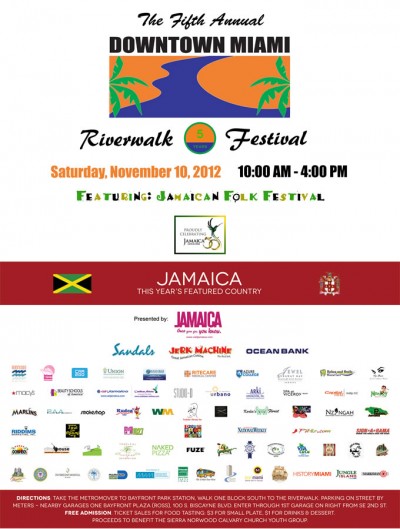 The fifth annual Downtown Miami Riverwalk Festival and Boat Parade will this year, feature a Jamaican Folk Festival in celebration of the Nationâ€™s golden jubilee anniversary of Independence. The event takes place on Saturday, November 10th, at the Riverwalk of the historic Miami River on Brickell Avenue in Downtown Miami, starting at 10:00 a.m. until 4:00 p.m.

Organized by the Urban Tour Host, the event, this year will feature a Jamaica Folk Festival and will to feature a wide range of entertainment including traditional folk performances and cultural activities showcasing the best of what Jamaica has to offer. Urban Tour Host hosts the annual event which showcases and promotes the multicultural communities of South Florida. In previous years, the countries of Bahamas and Haiti were among those nations featured in the downtown Festival.

Food lovers will get an opportunity to taste varieties of authentic Jamaican cuisine from local restaurants and catering houses. The exotic tastes of the island continue to be in high demand whetting the appetites of the growing South Florida community. Additionally, art enthusiasts will enjoy displays of art and crafts by local artisans. There will be fun and activities designed for the children, and a Boat Parade on the adjacent Miami River will also be part of the celebrations honoring the Nationâ€™s Independence.

This event has been endorsed by the Consulate General of Jamaica and the Jamaica Tourist Board as Jamaicans across the Diaspora continue their celebration of the Nationâ€™s 50th anniversary of Independence. Proceeds from the event will benefit a local Jamaican youth organization.

The cities of Miami and Kingston have long shared a lasting relationship as twinned cities under the Miami Dade Sister Cities Program since 1981.
Admission to the Festival is free and will give visitors and the nearly 1,000 local residents in the Downtown and surrounding Brickell area an opportunity to explore and interact among the pageantry celebrating the islandâ€™s rich heritage and culture as well as excite the interest of new audiences.

Jamaica gained its Independence from Britain on August 6, 1962. The history of the Jamaican community in Florida spans over four decades. The community numbers approximately 500,000 nationals residing in Florida State with large populations in tri-county South Florida, Central Florida and the Tampa Bay areas.

Presenting Sponsors: Jamaican Tourist Board in Celebration of the 50th Anniversary of the Independence of Jamaica and the Jamaican Consulate in Miami