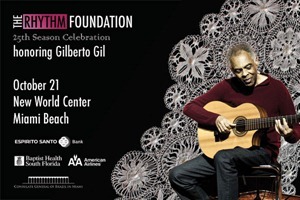 Tickets are $125 each, or a friends level membership which includes 2 tickets is $350. Order now by phone at 305-672-5202, or online through New World Center.
Details and our upcoming season at RhythmFoundation.com

For nearly 50 years, GILBERTO GIL has invented, innovated and reprocessed music in Brazil.  From the young bossa-nova musician, to the musical groundbreaker of the Tropicalia era, to the artist who made a perfect marriage between Brazil and Jamaican reggae, to the pop star who embraced rock and electronica, Gil’s music has encompassed everything from baiÃ£o and samba to MPB, reggae, afoxÃ©, and axÃ©. His strength lies in his compositions, voice and guitar mastery. He has been awarded several GRAMMY awards and other major honors for a career that continues to flourish. Gil’s years of activism came to a pinnacle when he was named Brazil’s Minister of Culture in 2003, where he helped moved Brazilian culture into even greater international prominence. This fall, Gil is co-curating "Voices of Latin America" series at New York’s Carnegie Hall.  He celebrates his 70th birthday this year.

Gilberto Gil has been an important part of the Rhythm Foundation’s history.  We have presented his captivating performances many times, including our inaugural season in 1988.

The Rhythm Foundation receives season support from the Consulate General of Brazil in Miami, the City of Miami Beach Cultural Arts Council and the Miami Dade Department of Cultural Affairs.