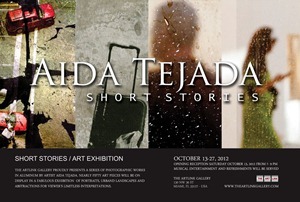 Musical entertainment and refreshments will be served

For â€œShort Stories,â€ her new solo show at the Art Link Gallery, Aida Tejada presents several series of photographic works on aluminum that range from portraits to urban landscapes and abstractions.

In her nearly fifty works on display her palette ranges from stark monochromes to striking color sometimes within a single image.

She presents startling facades upon which the skins appear to fade away to reveal the face of the everyday beneath them. For example, in the Solitude of a Mosquito, the rain-dappled figure of anonymous man is seen by the viewer while the insect of the title hovers over his face oblivious the fact it cannot draw blood from a shadow.
Like this and in many other of Tejadaâ€™s pictures she weaves unusual narratives without revealing the psychology behind her imagery.

In her split screened The Other Side, a woman in a green dress appears to be dialing a number on her cell phone while on the other panel an anonymous man exits the scene through a doorway.
What unites the disparate images in this scene and other in her series is a palpable sense of theater, of the dramatization of common everyday occurrences. Tejadaâ€™s goal is to present works that evolve as narratives employing the quotidian as departure points for open-ended readings.

Many of her scenes may appear banal at first blush but are inherently compelling through their vague evocations of a host of unspoken feelings.
Perhaps, most impressively the artist succeeds capturing her unique visual effects â€œin-cameraâ€ rather than relying on digitally manipulated computer media. She then transfers her imagery on surfaces such as aluminum to further fade away the first â€œliteral realityâ€ of the image and focus upon investing the moment of creation with a more profound sense of emotion.

Consequently she leaves it up to the viewer to interpret the subject matter within the   multitudinous alternative histories her vision opens to the imagination.