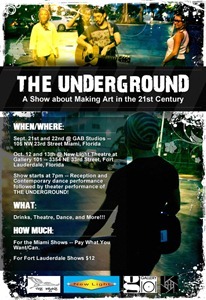 What it’s all about:
THE UNDERGROUND is a show about what it means to be an artist in the 21st century. That’s the big idea. On a narrative level, it’s about a young woman named Maude, who has just returned to live with her parents after getting an architecture degree, unsure of what to do with her life. Her parents, ex-musicians and ex-hippies, who used to open for The Dead, are baffled. Meanwhile, Maude is struggling with ideas of superficiality, wondering whether it’s even possible to create something with "depth" in this day and age. She decides that the only way to do it is to build herself an "underground." Literally, she’s digging a hole in her parent’s backyard. Will she succeed? What will she find there?
Come to the show and find out.

Why it’s Different:
The Underground isn’t just a show, it’s an event. Specifically, it is piece of "devised theater." What’s devised theatre? you ask. Vanessa Garcia, Founding Artistic Director of The Krane, explains: "This means that we didn’t start out with a script. Instead, the script arose out of the rehearsal process. I had a set of ideas I wanted to deal with — about art and what it means to make art today — and we took it from there."
In the process of creating THE UNDERGROUND, the actor’s wrote, the writer’s directed, and each member of the cast, staff, and crew became a mixed-media artist, taking on new roles.

And this is just a beginning. The show, which will run between half an hour and forty minutes, will expand from this production throughout the coming year. Garcia will take the process to LA, where she will continue to collaborate with actors, writers, and directors, to create a full length piece. The idea is to work this piece under the lead of Garcia and the co-production of Wendy White, co-founder of New Light theatre, throughout the year, and through the summer of 2013…
This 2012 launch, starting in September in Miami, is just the start of a much larger project and both Garcia and Wendy White, Co-producer and contributing writer and director, will continue to develop and, most importantly, BRING IT BACK TO MIAMI!
"The Underground brings art, song, theatre and dance to surface in a spontaneous burst of creative energy that frees the artistic souls in all of us to laughter!" states Wendy White, contributing writer and co-director of the Underground. "Join us as we break new ground theatrically with our collaborative creation revealing purely developed characters exploding with artistic passion."

What else?
For the Miami Show, we will also have a dance performance by Jessica Pusceddu and reception (drinks will be served) starting at 7 pm, right before THE UNDERGROUND takes the stage.
For the Fort Lauderdale show, there will also be pre-show beverages. And, following THE UNDERGROUND, the audience will be invited to experience another kind of "underground movement" in the artwork of Roland Ruocco.  www.rolandruocco.com
Ruocco’s art series is entitled, Earth Counterpart. "Earth Counterpart is a theoretical planet, a pristine world of high vibrational energies sharing the same with and of similar dimensions to Earth, but with vastly different landmasses, climates, flora and fauna," says Ruocco of his work, which is a unique combination of art and theoretical science.
The creative development and exploration of Earth Counterpart involves mapmaking, climatology, and formulating its evolved flora and fauna, brought to life via multi media visual arts such as drawing, painting, and computer aided design.
Krane, Inc. was named Best of the City 2010 by Miami Magazine, as the best up and coming theatre company in town. http://vanessagarcia.org/press/tethrical-chairs.php. Also in 2010, Vanessa Garcia, the Founding Artistic Director of Krane, Inc. was named one of Miami’s 20 Under 40 by The Miami Herald for her work in theatre. For more information about Garcia, please visit: www.vanessagarcia.org

Wendy White and Roland Ruocco are co-Founders of the New Light Foundation, a 501(c)3 non-profit public foundation, whose mission is to serve their community by providing cultural outreach through the arts and education.  More information about the writer and director, Wendy White can be found on her website: www.newlightgallery.org. Please visit: http://www.newlightgallery.org/paintingswendy/theater-resume.html

As for the companies themselves — Krane, Inc. and the New Light Foundation, Inc. have won numerous awards; have produced performances all over the world from Amsterdam to Edinburgh; New York City to Miami and have tackled subjects relating to women, love, politics, and Shakespeare.

For more information and/or interviews, please contact Vanessa Garcia at vgarcia43@yahoo.com and/or 305-450-9931 or Wendy White at wendywhitelight@homail.com and/or 954-829-0638. We welcome questions one and all! Looking forward to speaking.