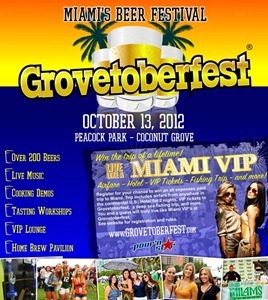 Itâ€™s a Great Year for Craft Beer!  On October 13th, beer enthusiasts from all over will converge at Peacock Park in Coconut Grove to sample unlimited beer from across the country and around the world at Grovetoberfest.

Aficionados and the â€œcasual beer fanâ€ will take an active role in beer sampling by voting for their favorite beers in three different categories.  They will also sample the festivalâ€™s very own Grovetoberfest Coconut Porter, which will only be available at the festival.  In addition to featuring 200 craft beers, Grovetoberfest will include an entertainment stage featuring Robert Elias, a Homebrew Pavilion, a Kitchen Lab for beer/food pairings, a VIP area and Food Row, where restaurants and food trucks will sell local fare.

New this year, Grovetoberfest will hold a â€œMiamiâ€™s Best Homebrew Contestâ€ presented by BX Beer Depot. The winnerâ€™s beer will be available at a local restaurant/bar for the rest of the year. Contest is only open to home brewers.  Grovetoberfest will also showcase all that Miami has to offer by running a National sweepstakes in conjunction with Beer Magazine and Draft that will give one lucky winner and a guest the VIP treatment, including roundtrip airfare, 2-night hotel accommodations at Sonesta Bayfront Hotel Coconut Grove, VIP tickets to the event, a Jet-Ski tour and a Deep-Sea Fishing trip.