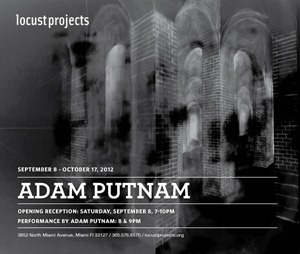 Locust Projects is pleased to announce the first Miami solo exhibition by New York-based artist Adam Putnam, featuring an installation in the main gallery. Below, the artist describes the origins of the project:

"A darkened space conceived for Locust Projects in Miami, a city defined by light toward the brighter end of the spectrum, articulated by pale pinks and hazy outlines. The space will be a cool shadow, which viewers may enter, pass through, and as if by chance, encounter photographs, portraits, film stills and other fragments. An orphaned brick pillar standing alone in the center of the space like the remnant of a nameless, indeterminate space, half remembered…a romanesque abbey, an ancient mosque, a gothic vault beneath an altar, a crypt, Piranesi’s prison, Escher’s gallery. An armature for the experience of finding oneself alone in an architectural immensity that falls away and recedes in perspective like fading memories and fog enshrouded mountains."

Born 1973. Lives and works in NYC. Adam Putnam’s work spreads across a variety of media – performance, projection and drawing. His work often delves into the psychological but holds fast to its roots in performance and architecture, exploring how the two often become intertwined. Putnam’s work has been included in various exhibitions worldwide, most notably the 2008 Whitney Biennial, 2nd Moscow Biennial, the Busan Biennial (South Korea), Art Statements, MoMA/PS1 and The Astrup Fearnley Museum (Oslo). Curatorial projects include an exhibition of Martin Wong entitled Everything Must Go at P.P.O.W. and Blow Both of Us at Participant Inc. Putnam is currently an Adjunct Professor at New York University.

2013 marks the 15th anniversary of Locust Projects, a not-for-profit exhibition space founded by three Miami artists in order to provide contemporary visual artists the freedom to experiment with new ideas and methods without the limitations of conventional exhibition spaces. Artists are encouraged to create site-specific installations as an extension of their representative work, and Locust Projects offers them a vibrant Miami experience to develop their ideas. Locust Projects is committed to offering an approachable and inviting venue for the Miami and international art community to experience the work and meet the artists.