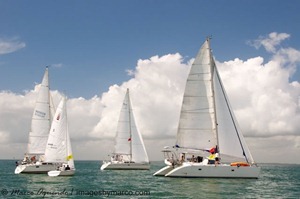 Now celebrating its 58th anniversary, BACARDI is excited to return as title sponsor, promising exciting racing and festivities for this rich sailing tradition. The BACARDI Columbus Day Regatta is arguably one of South Floridaâ€™s largest regatta drawing over 100 boats each year from as far as Palm Beach and Monroe Counties.

With Bacardiâ€™s renewed marketing efforts in the world of sailing, The BACARDI Columbus Day Regatta is now a perfect fit with MIAMI SAILING WEEK featuring The BACARDI Cup and bringing together two oldest regattas in Miami. under the Bacardi name.

â€œWeâ€™re so pleased to have BACARDI helping support the Columbus Day Regatta. This is a true testament to the legacy of sailing in Miami,â€ says Mark Pincus, Regatta Chairman. â€œThe continued partnership strengthens the regatta for years to come and helps support our efforts with Sailors for the Sea and junior sailing programs in South Florida.â€

Last year over 100 boats registered and this year 150 are expected. The BACARDI Columbus Day Regatta is expecting a large increase in entries due to the new concerted efforts by local sailing clubs to promote sailing on Biscayne Bay. It is estimated that over 1,000 sailors will be participating in the regatta and spending time in Coconut Grove. Now a tradition, the Dockside BBQ and BACARDI Bar at Coral Reef Yacht Club has become the premier Saturday night sailing eventâ€¦ better than any party down at Elliot Key. As it has been since the first regatta in 1954, all land activities will take place at Coral Reef Yacht Club including Fridayâ€™s Skipperâ€™s meeting, Saturday nightâ€™s Dockside BBQ and the Awards Party the following week, Saturday October 13.

The regatta is open to monohulls and multihulls in eleven different classes, ensuring there is a perfect class for everyone. Skippers can choose from the straightforward Gunkhole class, perfect for new entrants and cruising sailors, to the ARC and PHRF classes that zigzag their way across the bay.  All classes are scored on the PHRF  handicap system. Trophies will be awarded to the first three boats as well as numerous perpetual trophies. Skippers should refer to the Notice of Race (NOR) available at www.columbusdayregatta.net  for docking information, which must be made in advanced.