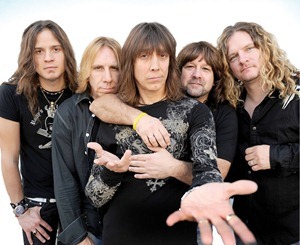 Multi-platinum selling rock band TESLA will take the stage at The Pavilion at Seminole Casino Coconut Creek on Thursday, Oct. 4 at 8 p.m. TESLAâ€™s line-up consists of four of its original members: vocalist Jeff Keith, guitarist Frank Hannon, bassist Brian Wheat and drummer Troy Luccketta, plus new guitarist Dave Rude who has brought a fresh energy and creativity to the band.

Formed in Sacramento in 1985, the group named itself after the eccentric inventor Nikola Tesla who pioneered the alternating current on which radio was based. Their debut album Mechanical Resonance, produced the crowd favorites â€œModern Day Cowboyâ€ and â€œLittle Suzi,â€ reached the Top 40 on the album charts and eventually went platinum. Their second album The Great Radio Controversy helped solidify the band’s growing reputation and fan base. Its first single â€œHeavenâ€™s Trail (No Way Out)â€ was a hit that set the stage for their second single sensation, a classic ’80s power ballad titled "Love Song," which pushed the album into the Top 20 and double-platinum sales figures.

The following year TESLA released Five Man Acoustical Jam, a live album featuring acoustic renditions of hits such as "Comin’ Atcha Live," "Gettin’ Better," "Modern Day Cowboy" and "Love Song." The album also featured a number of covers, most notably a version of "Signs," which became the bandâ€™s highest-charting single. Not only did the album reach the Top 20 and go platinum, it helped to inspire MTVâ€™s Unplugged series, which included artists such as Eric Clapton, Nirvana and many others following suit with live acoustic albums.

Psychotic Supper was released in 1991 and it quickly became yet another platinum success and spun off the greatest number of singles of any TESLA album with â€œEdisonâ€™s Medicine,â€ â€œCall It What You Want,â€ â€œSong and Emotionâ€ and the classic hit â€œWhat You Give.â€ TESLA followed up with Bust a Nut in 1994, selling over 800,000 copies and serving as a testament to the loyal fan base they cultivated.

After a break of six years, the band reformed in 2000 and soon after completed a full American reunion tour which also included recording the double live album Replugged Live at various cities. In 2004, TESLA released Into The Now and gave proof that the band from a previous decade was plunging forward into a new era of music and producing a sound that could compete with modern music. The group has since gone on to produce several additional hit albums and tour worldwide.