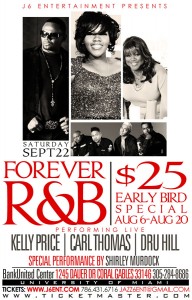 Tickets range from $35 to $65 http://tinyurl.com/9ey5d7o
Tickets are on sale at the BankUnited Center box office, Ticketmaster, and www.j6ent.com.

South Florida based J6 Entertainment taps into the valuable 25-54 demographic bringing to the stage rhythm and blues icon Shirley Murdock who in the late 80â€™s peaked on the R&B top ten with the hit â€˜As We Layâ€™, followed by years of memorable chart toppers and an acclaimed acting and gospel line-up of respected work. Heart-throb vocalist Carl Thomas adds to the roster promising an impressive return for a bevy of fans anticipating a night of â€˜Summer Rainâ€™ and â€˜So Emotionalâ€™ — hits that secured Thomasâ€™ spot in R&B history. Headlining the show is 4 time Grammy nominee Kelly Price, who since 1992 has graced the airwaves with beautiful songs full of amazing lyrics sealed in the memories of music lovers domestic and abroad.

Undoubtedly the most intriguing highlight of the show is the re-emergence of New Jack Swing super group Dru Hill featuring lead singer, Sisqo, who took a break from the group to deliver the solo hit â€˜Thong Songâ€™, only to return 8 years later uniting the group once again, much to the delight of R&B fans.

These iconic artists kick-off the â€˜Forever R&Bâ€™ Series of specialized adult contemporary rhythm and blues concerts across the U.S., with the first installment on Saturday September 22nd at BankUnited Center on the University of Miami campus in Coral Gables.