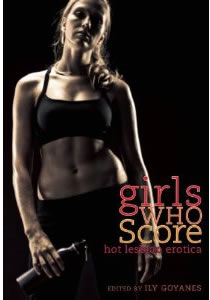 To RSVP for the event, contact Ily Goyanes at ily.goyanes@ampersandeditions.com

Girls Who Score release party is free and open to the public. Free libations provided by Premium Blend are sure to get everyone in the mood for the up-tempo beats of DJ Maximus 3000 (Twist, Revolution, Miami Beach Pride) and a special performance by writer, activist, actress, and organizer of the SWAN Spoken Soul Festival, Deborah Magdalena, who will be reading from GWS.

Celebrate the Sex Appeal of the Summer Olympics with the Release of Girls Who Score: Hot Lesbian Erotica

Miami-based Ily Goyanes, writer, editor, publisher, and filmmaker, has done it again. With the release of her latest anthology, Girls Who Score: Hot Lesbian Erotica, she not only pushes the envelope — she tears it open! Available now at top booksellers such as Barnes & Noble and Amazon, Ily Goyanes is set to celebrate the release of Girls Who Score on Thursday, August 30, 2012.

“Each of the sixteen stories in GWS plays up the sexuality of female athletes. Women who play sports have an easy confidence about them, a natural nonchalance, and usually a killer bod, that draws all kinds of women to them — straight, bisexual, lesbian, curious, questioning — you name it,” Goyanes says about her latest publication.