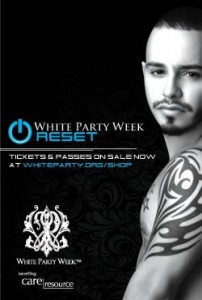 Witness the renewal of the 28th Annual White Party, as we hit RESET for the Crown Jewel of HIV/AIDS fundraisers and the White Party Week

It all begins Thanksgiving Week. As Miami recovers from not one but two Madonna MDNA concerts, White Party Week tradition continues its 28th year fighting HIV and AIDS. The White Party â€œcrown jewelâ€ event explodes on Saturday, November 24th inside the Soho Studio at the Wynwood convention center in Miamiâ€™s transformational design district with 2,500 men dressed â€” partially at least â€” in white dancing to DJ Danny Verde. Suddenly, the DJ stops the music and the curtain on the stage rises to reveal 50 white android male models. A silver-dominatrix-drag queen princess in a 24-foot headdress lashes out at the crowd with long fingers made of lasers. Reset, reboot, recharge and let the White Party begin!

Purchase your VIP ticket and arrive early at 9pm for a private invitation only VIP cocktail reception and fashion show featuring some of the hottest and most daring fashions of our time.

Tickets and passes are on sale now for the entire week of events and have been significantly reduced for those purchasing early.

Complimentary drinks are included with each ticket category.