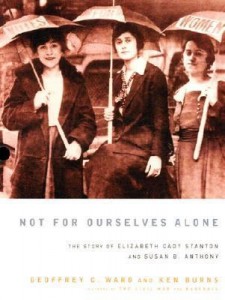 Not For Ourselves Alone: The Story of Elizabeth Cady Stanton and Susan B. Anthony –
Elizabeth Cady Stanton and Susan B. Anthony were two heroic women who vastly bettered the lives of a majority of American citizens. For more than fifty years they led the public battle to secure for women the most basic civil rights and helped establish a movement that would revolutionize American society. Yet despite the importance of their work and they impact they made on our history, a century and a half later, they have been almost forgotten. They were nearly total opposites in their personalities and attributes, yet complemented each other’s strengths perfectly. Stanton was a gifted writer and radical thinker, full of fervor and radical ideas but pinned down by her responsibilities as wife and mother, while Anthony, a tireless and single-minded tactician, was eager for action, undaunted by the terrible difficulties she faced. As Stanton put it, “I forged the thunderbolts, she fired them.” The relationship between these two extraordinary women and its effect on the development of the suffrage movement are richly depicted by Ward and Burns, and in the accompanying essays by Ellen Carol Dubois, Ann D. Gordon, and Martha Saxton. Not For Ourselves Alone is a vivid and inspiring portrait of two of the most fascinating, and important, characters in American history. (Biography, Social History, Gender Issues)