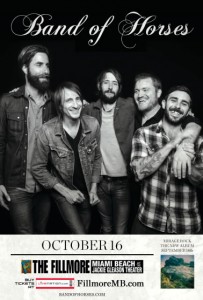 As part of the world tour supporting their hotly anticipated fourth album, Mirage Rock, due out September 18th, Band of Horses comes to the the intimate Fillmore Miami Beach. This is part of the Cruzan Concert Series.

Band of Horses is Ben Bridwell, Creighton Barrett, Ryan Monroe, Bill Reynolds and Tyler Ramsey. Mirage Rock is the follow-up to 2010â€™s Grammy-nominated Infinite Arms. Recorded at Sunset Sound in Los Angeles, Mirage Rock is arguably Band of Horsesâ€™ most cohesive and accomplished set of compositions and performances to date. Additionally, it is the first Band of Horses record to be produced by Glyn Johns, who was inducted into the Rock and Roll Hall of Fame this year in recognition of his work with The Beatles, Bob Dylan, The Rolling Stones, The Who, Led Zeppelin, The Faces, Eric Clapton and too many others to list. The first single â€œKnock Knock,” has been lauded by Entertainment Weekly for its “airtight guitars, propulsive drums and woo-oo-oohs” and described by Rolling Stone as having “more going on under the hood than usual, implying the band’s upcoming LP will be its most rocking yet.”