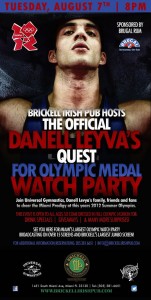 Come support Miamiâ€™s Olympic bronze medalist for the menâ€™s all-around individual. With the bronze around his neck, Leyva has added another step in his incredible journey from Cuban immigrant to world-class athlete.

This Cuban-born gymnast is now a world-class athlete. Come watch Leyva and support him while he competes for an Olympic medal in the menâ€™s horizontal bar

Join Universal Gymnastics, Levyaâ€™s family, friends and fans to cheer on Danell at Brickell Irish Pub! This is an event open for all ages, see you there!