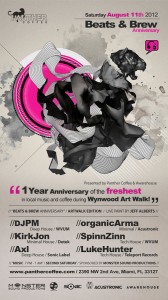 1 Year anniversary of the freshest in local music and coffee during Wynwood Art Walk! Thanks to everyone who has made our first year a success by stopping by and gettin down!!

– Kirkjon –
Originally hailing from the birthplace of techno, Detroit, Kirk Jon spent time in Philadelphia and New York City before making Miami his home in 2008. With over a decade of experience behind the decks, an extensive wealth of knowledge in all things dance music, and a deep bag of audio tricks, Kirk Jon delivers a mature and thoughtful approach to his DJ sets, remixes, and original productions.

A member of Maximal- a developing record label, booking agency, and promotional organization who have brought some of the most legendary parties to Detroit in recent years, Kirk Jon also joined forces with Wicked Miami to help make him a regular on the Miami DJ circuit with bookings at The Electric Pickle, Nocturnal, The Awarehouse, and The Fontainebleau just to name a few.

– AXL –
He began his career with the support of galaktika records, enters the electronic scene which starts with the sound professionally mix techno (minimal, electro, deep). In 2004 formed the group sonic label, keeping your interest in new music trends and the integration of audio-visual and multimedia concept. In 2010 the group was integra eternal underground booking agency of Argentina. In 2011 decides to go live in miami where it joins the group and seal kremadelik transoverload to support dissemination and promotion of electronic culture, in november 2011 integrates at the acustronic concept label & organicarma (the awarehouse crew)

– Organicarma (Live/DJ) –
organicArma is an electronic music duo with a distinct concept comprised of dhArma111 (drummer and vocalist) and Axiom (virtual reality constructor and vocalist). organicArma develops, in body, mind and beyond, the expression of art through music. By using philosophy, linguistics, psychology and technology, the band fearlessly tackles taboo themes and disassociation between opposites. They create music characterized by man-made rhythms and cleverly tweaked sounds played boldly on self-manipulated instruments. Their live show is a unique and visionary experience featuring raw instrumentation on futuristic devices matched with progressive visuals resulting in a show experience for all the senses.

– Spinnzinn –
In 2007, SpinnZinn moved to Miami to pursue a degree in Audio Engineering at the University of Miami. Outside the classroom, he joined the ranks of local radio station WVUM 90.5 and began hosting his own show, â€œBassment Sessionsâ€, every Thursday at 9pm. â€œBassment Sessionsâ€ brings back quality tech-house and techno to the radio waves and features a new guest DJ every week. Today, SpinnZinnâ€™s sound is a combination of house, tech-house, techno and minimal. It is this mix-mash of genres that gives his sets their high energy level and keeps fans on their toes. His sets have become a Miami favorite and are eagerly sought out by fans and techno junkies alike. SpinnZinn has held residencies in clubs and festivals all over Miami including Club Space and Ultra Music Festival 2010. He has been featured on a number of other radio shows and podcasts including Mocean District, SanedracHunter Presents, Wish Industry Radio and undergroundradio.tv. SpinnZinnâ€™s original tracks can also be purchased on BeatPort.com. Keep your ears peeled for more fresh beats from DJ as this rising star continues to turn out amazing sets.

– Luke Hunter –
Years of music flow between these two artists but the real synergy takes place when these great minds come together behind the decks or in the studio. Collaboratively Franccesco Cardenas and Luke Hunter fuse as one under the title SanedracHunter and the two have now expanded to both coasts with Franccesco â€œSanedracâ€ in the West in San Francisco and Luke Hunter â€œHunterâ€ in the East holding down Miami.