Aaayyy! Meet Henry Winkler The Fonz and Play to Win His Motorcycle from Happy Days at Seminole Casino Coconut Creek 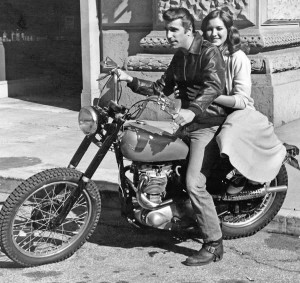 Aaayyy! Seminole Casino Coconut Creek is giving you a chance to win a slice of pure Americana – Fonzieâ€™s 1949 Triumph Trophy TRS from the popular â€˜70s hit sitcom Happy Days, on Aug. 25. Henry Winkler, a.k.a. â€œThe Fonz,â€ will be on-hand from 9 p.m. â€“ 11 p.m. to meet and greet players, and help award his iconic bike to one lucky grand prize winner who will ride off with the treasured piece of pop culture.

For an entire generation, leather-clad Fonzie and his show-stopping motorcycle embodied everything cool and collected. Arthur â€œFonzieâ€ Fonzarelli, a charismatic greaser and auto mechanic, was originally a secondary character on Happy Days but eventually became the lead after achieving sensational popularity from viewers. From his trademark stamp of approval, â€œAaayyy,â€ to his dissatisfaction retort of â€œSit on it,â€ his likeness and phrases graced everything from t-shirts to lunchboxes. In 1999, TV Guide ranked him number four on its 50 Greatest TV Characters of All Time list.

Fonzieâ€™s 1949 Triumph Trophy TRS motorcycle was provided by stuntman and Triumph dealer Bud Ekins, who removed the front fender, painted the fuel tank silver and changed the handlebars. A significant entry into American history, The Fonzâ€™s pride â€˜nâ€™ joy is currently on display at Seminole Casino Coconut Creek, while his brown leather bomber jacket hangs in the Smithsonian Institute in Washington D.C.

Players can swipe their playerâ€™s card daily for a chance to win, and receive one free entry for every 50 slot points earned or every $200 wagered on tables, excluding Stax Poker Lounge, beginning Aug. 1 at 7 a.m. On Aug. 25, 10 winners will be randomly selected and given an envelope each hour from 9 p.m. â€“ 11 p.m. Two â€œfinalistâ€ envelopes will be given every hour, which will give that player a chance to return for the final drawing at 11 p.m. Each finalist will receive a leather jacket with a key attached, and only one will open the lock to win Fonzieâ€™s motorcycle. Finalists whose keys do not open the lock will receive $1,000 in free play.

In addition to The Fonz, more of your favorite cast members from Happy Days will â€œrock around the clockâ€ at Seminole Casino Coconut Creek during August. Donâ€™t miss your chance to meet Anson Williams (Warren â€œPotsieâ€ Weber) on Aug. 9 and Donny Most (Ralph Malph) on Aug. 16 who will both be signing autographs and greeting fans from 6:30 p.m. â€“ 9:30 p.m.

Williams, known simply as â€œPotsie,â€ was loved for his gullible but well-intentioned manner and was an enthusiastic singer. After Happy Days, he began a prolific career as a television director, starting with short programs for adolescent-age children. He has also directed many episodes for a variety of television shows, including Beverly Hills, 90210, Melrose Place, Star Trek: Deep Space Nine, Star Trek: Voyager, Xena: Warrior Princess, Hercules: The Legendary Journeys, The Secret Life of the American Teenager, Sabrina the Teenage Witch and Charmed.

Most portrayed Ralph Malph, a practical joker who was best known for his famous catchphrase â€œI still got it!â€ Following his role as a regular cast member on Happy Days, he has appeared in other film and television work including EDtv, CHiPs, Baywatch, The Love Boat, Sliders, Star Trek: Voyager, Diagnosis Murder and Glee. He also made an appearance on Charles in Charge, alongside his former Happy Days co-star, Scott Baio.