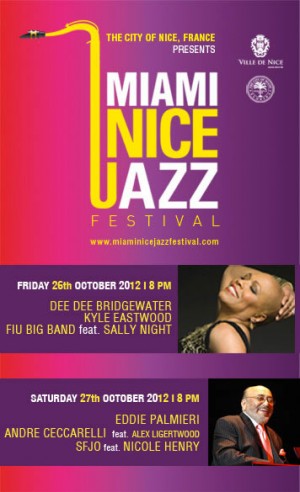 The first Miami Nice Jazz Festival is a partnership between Sister Cities Nice, France and Miami, Florida, joining forces under the leadership of the festivalâ€™s founder and CEO, Philippe Pautesta-Herder. The festival takes place at downtown Miamiâ€™s historic gem, the Olympia Theater at the Gusman Center for the Performing Arts. â€œDowntown Miami provides the perfect backdrop for the festival as Miami is a city rich in historic heritage and culture parallel to that embodied by the festival, its musicians and its patrons,â€ said festival founder Philippe Pautesta-Herder.

The festival kicks off Miami French Week, a week designed to promote French culture in South Florida. â€œThe Miami Nice Jazz Festival is the first and only jazz festival of such international significance to come to South Florida and I am extremely grateful to be a part of such an iconic occurrence,â€ said Philippe.