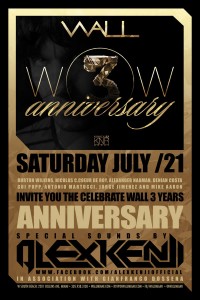 Albanian supermodel and former Miss Universe 2010, Angela Martini, will debut her Spring/Summer 2013 swimwear collection poolside at WET, boasting sexy and wearable styles with radiant hues and mix-and-match separates. Following her display, the party will continue inside WALL where internationally renowned DJ and producer, Alex Kenji, will hit the decks and spin the best of electro/tech house throughout the night.

Albanian born supermodel Angela Martini is no stranger to the fashion industry. By the age of eighteen Martini was modeling professionally for top fashion houses including Guess, Nautica, and Bare Necessities. Hoping to expand her outreach to women globally, Martini competed for the title of Miss Universe 2010 after having won the Miss Albania competition the same year. Martini took the crown at Miss Universe, and with it a heightened sense of vision and drive.

In her true entrepreneurial spirit, Angela Martini has segued from model to designer, launching her womens swimwear brand this summer. Having posed and walked in numerous swimwear fashion editorials and runway shows, Martini has taken note of and honed in on elements that would make swimwear more practical for women- an area that she believes is untapped in the swimwear market.
Martini creates her versatile swimwear collection with desire to produce a product that exudes both sex appeal and wear-ability. Angela Martini Bikinis offer women customization in swimwear selection through mix-and-match-able tops and bottoms.

Each piece is designed by Martini with the intent to work with all others in the collection, allowing the consumer to have the ultimate choice between less or more coverage and color. The concept of duality and flexibility in Martiniâ€™s collection reflects her astrological passion as a Gemini, represented by the Roman numeral â€˜IIâ€™ imprinted on her bikinis. Martiniâ€™s logo also stands as a testament to romance, applying the concept of finding oneâ€™s match or other half in life to outfitting the perfect, customizable bikini that fits in the moment.

For her premier Spring/Summer 2013 collection, Angela Martini is presenting an assortment of atypical bikini silhouettes inspired in cut and colors by exotic flowers. The collection showcases mono-kinis in the likeliness of orchids, petal-shaped bandeaus, halter-tops with floral palettes, form-conscious cutouts, and extra-long ties that wrap around the body creating a cage-like effect. The vivid lilac, rose, mint, and turquoise hues of the collection are made sporty when balanced with neutral shades of light grey, nude, cream, and stone. The swimwear separates range in retail from $46 to $105.

A throwback to carefree decadence, boutique lounge WALL at W South Beach has proven to be an impenetrably exclusive boite in the heart of South Beach. The Miami hotspot is a product of restaurateurs and nightlife impresarios Karim Masri, Nicola Siervo and Rony Seikaly, the masterminds behind KNR Group and projects including sought-after dining establishments such as Solea, Quattro Gastronomia Italiana and Sosta Pizzeria and Enoteca. Part owners in the venture include director of nightlife Navin Chatani and W South Beach assistant food and beverage director Jarred Grant. Straying from the traditional concepts of South Florida nightlife, the venue provides an intimate hideaway where celebrities and locals alike can relax and escape from the mayhem of South Beach.

â€œWALL is a smaller and intimate venue, a change for Miami Beach,â€ says owner Masri. â€œOn any given night our clients come to find like-minded people, while locals come to find their friends. We offer versatility throughout our concept so that guests can determine their own experience.â€

Get past the velvet ropes, walk through the beveled bronze doors, breeze past the champagne-swilling fashionable types and gaze upon the iconic interior design of Studio Bâ€™s Anna Busta. The gold-and-black motif radiates glamour and edge, and offers a layer of seduction by way of dark and textured walls. WALLâ€™s unique and open design allows for a constant flow of club-goers and encourages dancing into the late morning hours. The central area features two signature gold leather couches arranged in easily accessible rows. The back bar displays feature large LED backlit picture frames made from mirror incorporating WALLâ€™s signature diamond motif into the space. The DJ booth is optimally located in the center of the room facing the main bar. However, the â€œpiÃ¨ce de rÃ©sistanceâ€ is the 35-inch spherical Raimond chandelier, an exquisite new creation from the Dutch design house Moooi. Designed by Raimond Puts for Moooi in the Netherlands, Moooi’s Raimond Light is a sparkling sphere containing hundreds of LED lights that will replace the central mirror disco ball. The intricate sphere of the Raimond Light transports the electrical current allowing the LED terminals to then join these paths to create an atmospheric ambiance.

The entirely VIP 4,000 square foot venue, nestled within the award-winning W South Beach, consistently attracts A-listers, jet-setters and nightlife aficionados from around the world, providing further reason for South Beach to be lauded as a top nightlife destination.

â€œWhat makes a club a â€˜destinationâ€™ is the ownership behind it,â€ said co-owner Siervo. â€œYou can put gold on the walls but if the team behind the club is not established, experienced and well-respected locally, it doesnâ€™t stand a chance. Miami is our backyard and most of our clients are our friends and fellow industry insiders.â€