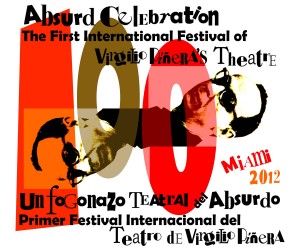 In celebration of the centenary of the birth of controversial Cuban playwright Virgilio PiÃ±era, the University of Miami (UM) Jerry Herman Ring Theatre will present five of his brilliant plays under the title of Absurd Celebration: The First International Festival of Virgilio PiÃ±eraâ€™s Theatre. The plays are produced by a combination of national and international companies and UM Department of Theatre Arts.

ABSURD CELEBRATION has been chosen as the kick-off event for Taking Flight: The Year of the Humanities and the Arts at the University of Miami.

Virgilio PiÃ±era Llera (1912-1979) is one of Latin Americaâ€™s most important playwrights. He is credited for having brought modernism to Latin American theatre and for having written the first theatre of the absurd play. He lived in Argentina for 12 years, where he befriended writers such as Jorge Luis Borges and Witold Gombrowicz, and collaborated with the literary magazines Sur (Buenos Aires) and OrÃ­genes (La Habana).

He died in Cuba, ostracized for his misunderstood creativity, his homosexuality, and his unprejudiced and irreverent personality. As the consummate artist and rebel, Virgilio has become a symbol for the quest of artistic freedom and renovation of styles in literature, the visual arts, and mass media.

Additional support for ABSURD CELEBRATION comes from The Joseph Carter Memorial Fund, The City of Coral Gables, Centro Cultural EspaÃ±ol, ABC Charters, Xael Travel, and from the following University of Miami entities: The Cuban Theater Digital Archive, Program in Women and Gender Studies, Center for Latin American Studies, Center for the Humanities and the Richter Libraryâ€™s Cuban Heritage Collection.
The University of Miamiâ€™s mission is to educate and nurture students, to create knowledge, and to provide service to our community and beyond. Committed to excellence and proud of the diversity of our University family, we strive to develop future leaders of our nation and the world.www.miami.edu

August 17-19: Aire FrÃ­o / Cold Air. Argos Teatro (Cuba). Director: Carlos
CeldrÃ¡n
Internationally renowned director, Carlos CeldrÃ¡n, comes to the U.S. for the first time with his version of Virgilio PiÃ±eraâ€™s masterpiece. We see the Romaguera family for a dazzling period of twenty years obsessed with their frustrations and dreams. The protagonist, Luz Marina, is struggling to make ends meet due to their familyâ€™s dire economic condition. Art, filial relationships, marital conflicts, and the heat, always the heat, are some elements of this play that, although written 50 years ago, continues to be relevant nowadays.

August 31-Sept. 2: Los Siervos / The Serfs. Teatro de la Luna (Cuba). Director â€“ RaÃºl MartÃ­n
After three sold-out performances of Delirio Habanero last October at the Miami Dade County Auditorium, Teatro de la Luna returns to Miami with Los siervos / The Serfs. Written in 1955 as a mockery of the false ideology of Soviet Communism, it is an anti-bourgeois farce that derides hierarchies, dictatorships, and the many uses and abuses of power that determine human conduct. Its director takes advantage of absurdist techniques, singing and dancing to bring us a brilliant and funny play that from stage design to acting techniques is far from the realism we are used to seeing in the contemporary American stage.

September 7-9: Una caja de zapatos vacÃ­a / An Empty Shoe Box. La MÃ¡ Teodora (Miami). Director â€“ Alberto SarraÃ­n
Twenty-five years after the world premiere in Miami, SarraÃ­n brings back to the stage a new version of PiÃ±eraâ€™s classic about power relationships. Teresa MarÃ­a Rojas, the grand dame of Spanish theater in Miami, stars as one of three characters who rehearse the transfer of power to the mightiest. This new production highlights the interconnections between gender, sexuality and politics through the use of black humor.

September 14-22: Carrying Water in a Sieve: an evening of two one acts: You Always Forget Something and False Alarm. UM Jerry Herman Ring Theatre (Miami). Director – Henry Fonte
Translation by Kate Eaton
Produced by the University of Miamiâ€™s Department of Theatre Arts and Jerry Herman Ring Theatre, these two delightful one-act comedies highlight PiÃ±eraâ€™s playful sense of humor. The first, You Always Forget Something, is a fanciful comedy about four eccentric women who try to make order out of a capricious society, but by doing so they create chaos, disorder, and mayhem. The other, False Alarm, hilariously portrays the predicament of a man charged with murder who struggles to save his crumbling sanity in the face of a demented widow and an irrational judge. Both short plays exemplify PiÃ±eraâ€™s unique writing style and his wonderfully absurd sense of humor.