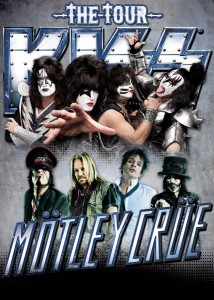 Tickets at Ticketmaster.com and LiveNation.com.
For tickets & VIP packages, including opportunities to meet Kiss and MÃ¶tley CrÃ¼e, please visit www.KISSonline.com or www.Motley.com.

With combined album sales of almost 200 million, Kiss and MÃ¶tley CrÃ¼e are more than just iconic; they remain today as the dominant powerhouses of rock music tallying 30+ chart-topping hits, countless sold out tours and awards and accolades from around the world. Known for their elaborate and spectacular stage shows, each band plans to give fans the ultimate summer concert experience with the most impressive lighting and sound production ever and their signature over-the-top pyrotechnics. This is the first time Kiss and MÃ¶tley CrÃ¼e will share a stage since 1982.

These veterans of the music business are still at the height of their popularity. Kiss is the juggernaut of them all, with 3,000 licensed merchandise products, including the Kiss golf course in Las Vegas and a new album. KISS has broken box office records set by The Beatles and Elvis. MÃ¶tley CrÃ¼e is the first rock band in history to have just completed an epic sold-out Las Vegas residency at The Joint at Hard Rock Hotel & Casino. The band is best known for continuing to reinvent not only their live show (with mind blowing elements such as Tommy Leeâ€™s 360 drum roller coaster) and music (brand new song due out this spring), but remain on the cutting edge via social media interaction. MÃ¶tley CrÃ¼eâ€™s New York Times bestselling book The Dirt is currently being adapted into a major motion picture. Last month, the band was featured in one of the highest rated Super Bowl ads of all time for the KIA Optima.

While you are waiting for The Tour to arrive in SFL, be sure to check out the new MÃ¶tley CrÃ¼e single “Sex” dropping on July 17th. According to Blabbermouth, the song will debut on SiriusXM on Friday, July 13. “Sex” is the first release from MÃ¶tley CrÃ¼e since “Saints of Los Angeles” in 2008. The band wrote “Sex” during their Las Vegas residency earlier this year and it was recorded in The Atrium, Tommy Lee’s studio in Calabasas, California.