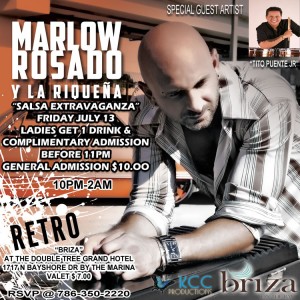 For more information contact Briza at (786) 350-2220 or email:Â briza@brizaonthebay.com
Admission is $10. Ladies get one drink and free admission before 11.

Enjoy a night of hot salsa by one of Miamiâ€™s best musicians at one of the cityâ€™s most charming nightspots, Briza on the Bay. The backdrop is a panoramic view of the beautiful marina. Looking for an upscale touch? This is the place. With top of the line sound and AV, and signature drinks such as the Sea Briza, Marlow Rosado and his band, â€œLa RiqueÃ±a,â€ with special guest Tito Puente, Jr., will be playing at the venue in the Doubletree Grand Hotel downtown, from 10 PM to 2 AM on Friday, July 13.

From salsa to rock, from merengue to hip-hop, from bachata to reggaeton, producerÂ /Â composerÂ /Â pianist Marlow Rosado has had his musical hand in all of it. A native of Puerto Rico, he is a salsero at heart, but has successfully written, played and produced hits in a variety of musical styles for some of the most renowned artists in Latin music. He has played and worked with a diverse repertoire of artists including Celia Cruz, the unforgettable Tejana signer Selena, Larry Harlow, Tommy Olivencia, Marc Anthony, Ricardo Montaner, Olga TaÃ±Ã³n and Desmond Child, among others. Recently, he arranged and directed the horns sessions for Ricky Martin’s new production. He is continually sought out by Latin Artists for his musical arrangement skills, his aggressive montunos on the piano, as well as his ability to direct orchestras for artists such as the late Salsa legend Celia Cruz, Tito Puente, Jr., Tito Nieves, and many others. It is not uncommon to see Marlowâ€™s name on CD liner notes, whether it is as a pianist, producer, songwriter or musical director.

Now, with the birth of Marlow Rosado y La RiqueÃ±a, the man behind the music takes to the stage himself, with the project closest to his heart and years in the making, his new CD, â€œRetroâ€, taking some of the strongest songs from the 1970’s, maintaining the essentials of the originals, but metamorphosing them in Marlow’s 21st-century conception until they become entirely his own.