Radical Genealogy: The Decline of Dauphins, Courtesans, and Hounds 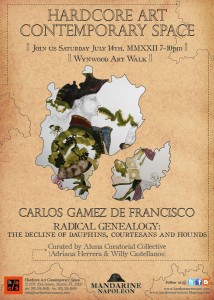 Hardcore Art Contemporary Space presents the first solo exhibition in Miami of Cuban artist Carlos GÃ¡mez de Francisco (b. HolguÃ­n, Cuba, 1987): “Radical Genealogy: The Decline of Dauphins, Courtesans, and Hounds”, curated by Aluna Curatorial Collective | Adriana Herrera & Willy Castellanos). GÃ¡mez appropriates the aesthetic of the opulent and decadent atmosphere of the days of the last French monarchs to create a parable of absolute power. Black humor serves as the narrative thread linking pictorial scenes in which the bloody and the absurd converge with ostentatious fashion. Each frame opens a window onto a story that functions simultaneously as a prophetic mirror: in its background one may catch a glimpse of the fate that awaits the characters thriving on excessive power. Its different modes of perpetuation, sometimes associated to a perverted Eros, culminate âˆ’ as do the diverse series and animations by the artist âˆ’ in the genetic defects (metaphors for the social disorders) and in the death sentences which the French Revolution associated with the guillotine. The famous attraction of the abyss exerted by the unrestrained libido is as strong and deceitful as the seduction exerted by the libido imperandi, the wish for unlimited power.

Despite being a young emerging artist, this will be his 13th solo exhibit. In 2011, he won the Norman Kohlepp Merit Awards, from the Louisville Visual Art Association, Louisville, Kentucky. In 2007 he won the award for Best Short Film in the Seventh National Festival of Audiovisual â€œBy First Timeâ€, HolguÃ­n, Cuba.