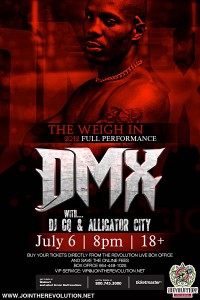 In 1999, DMX released his best-selling album …And Then There Was X, which featured the hit single “Party Up (Up in Here)”. He has acted in films such as Belly, Romeo Must Die, Exit Wounds, Cradle 2 The Grave, and Last Hour. In 2006, he starred in the reality television series DMX: Soul of a Man, which was primarily aired on the BETcable television network. In 2003, DMX published a book of his memoirs entitled, E.A.R.L.: The Autobiography of DMX.[2] DMX dropped a new mixtape “The Weigh In” as a prelude/promotion towards his upcoming album on May 15th 2012.